A New Year, a New Dream 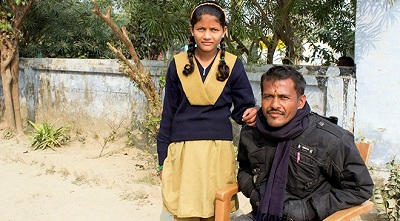 The KGBV school in the Bahraich district of Uttar Pradesh is a warm and welcoming building whose classroom and library walls are covered with many beautifully handmade posters. The students, wearing neat uniforms, stood in front of a school reciting poetry and performing a short theatre piece. Pooja Prasad, who is in her second year at the school, performed the lead role in a drama on ending gender discrimination in families.

Pooja lives in an area that’s affected by heavy rains each year and it had been hard for her to attend school consistently due to flood-related closures. Her father, Kamta Prasad, was delighted to learn about the KGBV where she can live and study safely. Since he could not get a school education himself, Kamta’s wish for Pooja is to learn as much as possible.

After the assembly I met Kamta Prasad. Seated on a plastic chair in front of some plants that the students are growing, he told me about his dream to see Pooja educated. Since he could not get a school education himself, his wish for Pooja is to learn as much as possible.

Kamta is thankful to all KGBV teachers, especially the headmistress, for keeping the students happy and secure. A wide smile came across Kamta’s face when he told me that Pooja has become a fast learner within just two years at the KGBV. Seeing the change that education has brought in her, Kamta is certain that he will send Pooja for further studies. Although the nearest higher secondary school is 15 km away from their home, he told me that he will send her there somehow.

Before I left, Kamta proudly told me that Pooja just told him she wants to be a doctor. He was so happy since that was the first time Pooja told him what she wanted to become. It was beautiful to see a new dream take shape in his eyes.