A tale of grit and survival 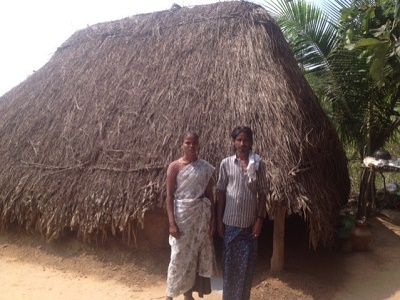 Ms. Lakshmi standing in front of their partially damaged house

Vallipuram a village Panchayat in Kanchipuram district of Tamil Nadu, consists of more than 10 small village hamlets. One of the habitations is ‘Vallipuram Yeri Karai’, which means Vallipuram’s river bed. This habitation consists of about 13 huts, all of which lie on the bank of river “Palaar”. Most of the population of this area work as agricultural labour and have lived here for more than 40 years.

In December 2015, heavy rainfall caused the water levels in ‘Palaar’ to cross the danger level and thereby causing floods in villages and the other habitations along the river bank. Water gushed into houses and severely damaged them. More than 4 houses were damaged, and a little girl drowned during heavy floods. The rest of the population took shelter in the nearby community hall. They had to stay there for three days and could only return to their houses once the water levels receded. At their return the sight of misery greeted them. Huts were wiped away by the upsurge in the water levels.

Lakshmi a resident from one of the most severely affected villages expressed that of all items in the relief kit distributed to them, the hygiene kit that contained water purification tablets and sanitary napkins for women was most useful to her. The river is the only source of water for the people who live in this region, and post the floods, the river water got severely contaminated. We started using the water purification tablet as explained by the CARE team during the time of relief distribution, and this helped us keep diseases at bay.

Mahadevan, another resident from the village, who lost his entire house exclaimed that the timely distribution of household utensils as well as jerry cans and tarpaulin helped him cope with the circumstances.  Tarpaulin was used as tents for those who had lost their huts and for many it will be used as a roof cover even in the future. The government had provided dry ration for the flood victims and utensils provided by CARE enabled them to start cooking immediately.

The Community expressed nothing but gratitude for CARE India and its timely intervention. This intervention helped many households to get back on their feet. CARE through its efforts reached out to the most vulnerable population of the area and helped them avert greater disaster. Most of these households were able to restore their lives due to CARE’s efforts.