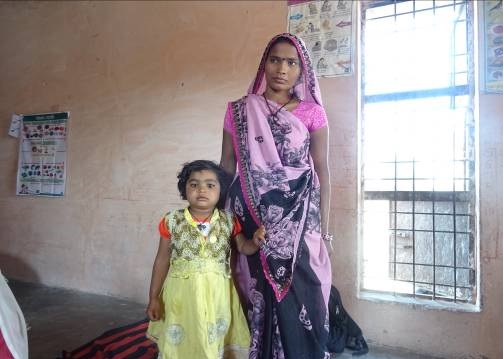 This story is of Bhagwati Ahirwar from Kayan village in Madhya Pradesh. Having helped reduce malnutrition among the children in the village, Bhagwati is a role model for her villagers.

With her marriage while in class 8, Bhagwati had to end her education. Soon she gave birth to an underweight child, her husband and in-laws moved to the capital city for work and she and her daughter had to survive on the money that her husband sent her.

When Bhagwati got to know that there is a vacancy for a Nutrition Volunteer with CARE India’s Madhya Pradesh Nutrition Project (MPNP), she appeared for an interview and joined CARE India in 2014. Although Bhagwati was at first scared to communicate with people, CARE staff motivated her through a series of training and provided her with a thorough knowledge of Infant and Young Child Feeding Practices (IYCF), communication skills and technical knowledge related to nutrition.

As a Nutrition Volunteer, Bhagwati conducted home visits and met with the mothers of malnourished children and PRI members in the village. She used the knowledge she received through the trainings in her own life. She breastfed her LBW child 10 to 12 times a day for the first six months and thereafter focused on nutritional feeding at regular intervals. As a result, her child gained half a kg in a month and continued to progress as time passed. Thereafter, Bhagwati cited her own experience in all the meetings for Severe Acute Malnourished children (SAM) and encouraged mothers in the village to follow a nutritional diet for their children. In the meantime, Bhagwati referred 20 children to Nutrition Rehabilitation Center (NRC) and ensured that all of them received four follow-up visits at NRC. She also used CARE India’s dietary recall tool for counseling the mothers by reviewing the diets of their children and demonstrating proper diet routines using calibrated bowl and IEC materials. With Bhagwati’s efforts over a three years’ time, the number of severely malnourished children in the village reduced from 15 to 6.

Today Bhagwati is a proud woman who has saved many children in her village from being malnourished. Having seen the changes that she has brought in so many lives, Bhagwati’s husband today stands by her for continuing her education. But there are still many children who are severely malnourished and need our support for building healthy lives. By helping infants get access to proper nutrition, MPNP contributes towards reducing malnutrition among children below 5 years of age in three districts.

Join us, as we work with more women like Bhagwati in the fight against malnutrition by raising stronger awareness, and encouraging more families to holistically address the root causes.