Breaking the shackles of early marriage 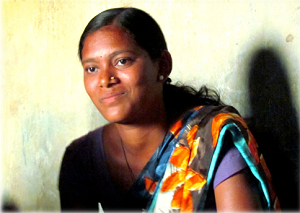 “I wanted to study further, but my father would never have allowed it. Nobody in my family has studied beyond primary school,” says 16-year-old Sujata Majhi, describing her situation, just a few months earlier. An Adivasi girl from Bhulia village in Odisha’s Kalahandi district, Sujata has four siblings, two brothers and two elder sisters who were married off at an early age.

Similar to conventions in other parts of the district, early marriage is a common practice in Bhulia village. For the community, the suitable age for marriage for boys is 17 to 19 years and for girls, as young as 14 to 16 years.

“Due to lack of awareness on education in the community, the children are able to study only up to primary and upper primary levels.  Very few boys from the village have completed their high school. Education of girls has never been considered a need or requirement, therefore they continue to not only be neglected, but also discouraged,” says Lakhmi Majhi, Secretary of Satya Shanti Self Help Group of the village.

According to the District Information System for Education, 25.9 percent of girls marry before the legal age of 18 years in Kalahandi.  Prevalence of marriage below the legal age is one of the multiple factors that contribute towards the unacceptably high number of maternal deaths. A woman with low education levels is not aware about her rights and can easily fall prey to domestic violence and other social deprivations. Education also plays an important role in helping the woman to be financially independent.

But the damaging consequences of early marriage do not deter Adivasi parents from marrying their wards early, especially girls. For them, marriage is considered a huge responsibility which they want to fulfil, as early as possible. They also consider marriage to be an important stepping stone for a secured future for their children.

“If we don’t get the boys or girls married early, others in the community taunt us that there will not be enough marriage proposals in the future,” says Sujata’s father, Ghari Majhi.

Some parents in the community, marry off their children when they have enough resources to bear the expenses of a marriage feast. “The community fears that if they will send their daughters to school, they will elope with someone. Parents feel threatened as such incidents bring shame on family reputation,” reveals Senapati Majhi who is a male champion in the village and supports Sujata’s fight against early marriage.

Sujata’s parents are being pursued for her marriage since she was 13, three years ago. Last year, she appeared for her Class 10 exams but couldn’t qualify, which further added to the pressure.

However, with CARE India’s Pathways Project intervention, efforts are now underway to initiate discussions in the community on the adverse effects of early marriage and the importance of girls’ education. An initiative called the Reflect Circle was started under the Project, though its partner NGO which could identify pertinent issues in the community and initiate discussions on gradually changing conventional mindsets. The Reflect Circle – now serves as a common platform for everyone to voice their concerns, discuss problems and possible solutions on personal as well as community matters.

So much so, that it encouraged and motivated Sujata’s mother, Gouri to understand the benefits of educating her daughter and ill effects of early marriage. With help from other Reflect Circle members, she now supports her daughter to pursue her studies and has also been trying to get her husband on-board.

“I am now convinced that Sujata is too young for marriage and she has her certain aspirations . As parents, we need to extend all our support so that she can achieve her dreams. I am sure her father will soon agree and help her pursue her education” says Gouri.

Though Sujata is determined to continue her schooling and clearing her upcoming matriculation exams successfully this time, the challenges are many. Since there are no other girls from the village pursuing school, it is hard for her to seek help for exam preparations.

“I am the only girl in Class X and it is difficult to study alone. There is no other girl in the village studying in my class.  But I want to study further in college work eventually,” she says.  She is currently taking help from her school teachers and is hopeful about clearing her exams this time.  Drawing lessons from the lives of other girls who were married off early, Sujata has now decided to stand strong, complete her graduation and become self-dependent.

In Bhulia village, the Reflect Circle has taken means to address various issues of the community. However, the issue of girls’ education, mapped as one of the major concerns continues to remain a major trial. Changing the patriarchal mindset of the men in the community, who are the decision makers at household and community level, is not easy.

However, regular sensitization meetings and screenings organized by the Pathways Project, along with awareness drives, have been helpful in reducing number of early marriages in the village. Hopefully, Sujata’s story will inspire other girls in the community to break the fetters of early marriage and pursue their dreams of higher education.