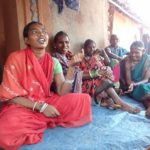 CARE India with financial support from AXA has been implementing Where the Rain Falls (WtRF) project since 2010-11. While the first phase was dedicated to research, the second phase is devoted to Community Based Adaptation (CBA), under which the project aims to increase the resilience of 3000 tribal women and their households, in 40 villages of the Jashpur district of Chhattisgarh (India), to shocks and stresses around water and improve their access, control and management of natural resources. To scale up the impact of CBA component of WtRF in the country, CARE India has initiated phase III (2017 – 2019) of WtRF from January 2017 where the focus is on informing, influencing, and supporting community institutions and key development actors to adopt those CBA measures and technologies. This phase of WtRF will continue to operate in the existing 40 villages of Jashpur district, Chhattisgarh for deepening of CBA activities and testing a few new models. Ten villages from Vidharba region in Maharashtra is also selected to test and develop the CBA model contextualized to the new State.

CARE India’s project intervention encompasses a range of innovative initiatives that help women build secure and resilient livelihoods and climb out of the poverty trap. One of the major components of the project is to work with women from marginalized communities to augment their knowledge, skills, self-confidence, assets and social networks so that they can lead quality life even in uncertain times, producing more, working with dignity, and earning higher and stable incomes to fulfil their aspirations. The project works towards creating an enabling environment for women and their collectives to manage their assets and resources collectively and sustainably, protecting them from shocks and stresses related to climate, markets etc.

Umapur is one of the largest villages in CARE India’s project intervention block of Jalgaon Jamod, under Buldhana district of Maharashtra. The village is mostly dominated by marginal farmers, who are into the practice of taking loans from private money lenders at exorbitant rates of interest of 100% per annum, for cultivation and purchase of agricultural inputs.

In the year 2006, Social Welfare department supported organization developed a Self-Help Group (SHG) in this village, but thereafter the SHG became defunct. With the scaling up of ‘Where the Rain Falls’ project of CARE India in Jalgaon Jamod block in September 2017, the project team started to revive this SHG by educating and mobilizing its members.  Because of continuous support from the project, the SHG started meeting every month and its members began contributing Rs. 100/- as monthly saving per member.

Within a year of its revival, the SHG approached the same branch of State Bank India i where they  deposited their monthly savings, to avail a loan of Rs. 1,00,000/- for goat rearing. In August 2018, assessing the group’s performance and regular savings of the group, the bank sanctioned the requested loan amount to the group for goat rearing activity. The project supported the SHG members by linking them with veterinary department for vaccination and deworming of the goats and ensured insurance coverage of goats towards risk mitigation. Each member of the SHG is now rearing two goats because of project support and the bank loan. Goats are kept as a source of additional income and as an insurance against income shocks arising out of crop failure. In addition, a few goats can be maintained easily and can be easily sold as support in times of distress.

On a monthly basis the group is collecting Rs.560/- for bank loan repayment, Rs. 100/- as members savings and Rs.120/- against group loan and interest repayment from each member. This initiative has ensured peace and stability in the household of the member. The future does not look so uncertain any more. Regular repayment of bank loan makes the group credit worthy.