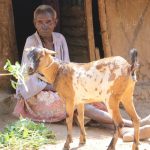 Onurina Ikikoyi cannot recall the exact date she delivered her tenth and last-born child. However, she remembers the joy she felt after giving birth to the only girl-child in the family. Celebrations went for a week, she recalls, as her relatives and friends delighted in yet another precious addition to the family.
For Onurina, having many children meant a guarantee of a better and secure life in old age. In her culture, children provide for their parents. They are a safety net when one is frail. But for Onurina, fate had its own ideas.
“I lost all my nine sons,” says Onurina from Enyif village in Torit. “I am only left with one daughter, my last born. She is married and stays in a nearby village but she comes to see me every day to give me food.”
Seven of Onurina’s sons were soldiers and died during the height of the war for self-determination in the then southern Sudan. Even though Onurina maintains that her boys died for a just cause, she says loneliness and poverty, sometimes make her wish they were around.“In my culture, children are wealth. They should take care of you in your old age,” explains Onurina who is in her late 90s. “But it’s unfortunate that I had to bury my own children. They were supposed to be the ones to bury me.”

In May last year, Onurina was selected to be part of CARE’s small livestock project, which is being implemented in her area. She was given two goats. Due to her failing eyesight and advanced age, her only daughter and grandson takes care of the goats for her. They milk them every day and give her the milk as part of her breakfast. “I like goat’s milk so much,” says Onurina. “It gives me strength when I drink it,” she says with a smile.
With the other goat set to give birth, Onurina, is still hopeful that she will live to see them multiply. She adds, “I will sell but not all of them. I want them to be a legacy for my grandchildren. When they grow up, they will use the goats to pay for dowry.” 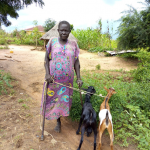 Onurina is not the only elderly person being supported by CARE in the small livelihoods project. Among the 700 beneficiaries who received goats, 150 are above 50 years old. One of them is Uleda Ilika, 57, who is also a widow.
Uleda lost her left side leg in 1993 during the civil war. She currently stays with her grandson who is helping her to take care of the goats.“I cannot thank CARE enough,” she says. “I never thought I would own goats in my life,” says Uleda who also benefited from a CARE farming project.“I was surviving on wild vegetables but with support from CARE, I got vegetable seeds, which I planted. I now have a backyard garden and no longer have to go to the bush to look for wild vegetables.”

The small livestock project falls under the South Sudan Joint Review project 4, which CARE is implementing in Torit. The project aims to save lives by providing assistance to communities by reducing acute humanitarian needs among the most vulnerable people.