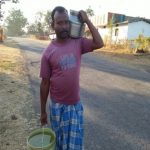 Sateswar Bhagat, Cluster Coordinator of Bartoli village in Bagicha block of Jashpur district in Chhattisgarh has become an example for his villagers by breaking gender stereotypes. A three day gender sensitisation workshop organised by CARE India’s Where the Rainfalls( WtRF) project gave new direction to the life of Sateswar Bhagat.

During the workshop Sateswar was given an assignment to break at least one stereotype forever in connection to his family, relatives and society. He realised the present situation of women in his family, relatives and society and asked many questions to himself again and again. Why women always cook and feed others, do all household work, collect firewood, wash the cattle shed and take care of children and other family member and always stay at home? How long women will sacrifice their wishes for others at every step of their life? What respect they are getting its return? Why do they not have any kind of liberty or freedom? Over and above women are human beings like a men.

Finally, Sateswar realised that women are key actors in contributing to family and society for their advancement. Women play the role of a  friend, leader, administration, manager and last but not the least the mother which a male cannot do. Again, he realised how excessive workload on women cause a serious problem on their health.

At last Sateswar took an oath to participate with his wife in all household chores. Now he wakes up regularly early in the morning before his wife wakes up, sweeps the house and goes to the village tube well to fetch water. He became very comfortable and happy with his work and has now set an example before the other neighbouring households.

Sateswar already motivated to act as a male champion in his village stated, that he is very thankful for the sessions he attended which helped he realise the value of women. He is extremely proud of the transformation that he has brought in his life and feels great about the change.