Chinnapan models a brighter future for women as entrepreneurs 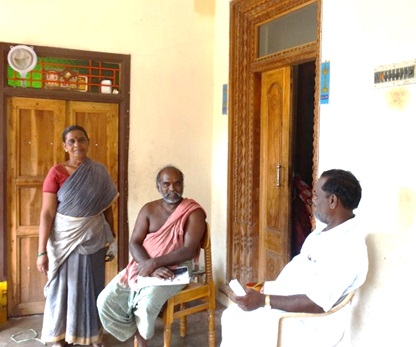 Role models are the support systems that help women entrepreneurs strike a balance between their households and enterprises to bring about positive change in their lives and livelihoods. These people are formally trained as part of CARE India’s Women Leadership in Small and Medium Enterprises (WLSME) to help women with household chores as well as in the business. They also participate in gatherings where professionals like lawyers, entrepreneurs as well as other role models share their experiences. These gatherings act as a platform where various obstacles faced by women and how they can be overcome with support from the family are discussed.

Chinnappan is a trained role model from Panikkankuppam. He does not know all the SMEs well, but that has never stopped him from sharing his experiences with others. On his first visit to one of the gatherings he was accompanied by a member of staff, now he attends them on his own and he is very comfortable sharing his thoughts and experiences with others. He realises why he was chosen as a role model, he also understands the importance of engaging men for supporting women entrepreneurs.

According to Chinnapan, a lot of men have experiences but they are hesitant to share. These men do not feel comfortable with recognising women entrepreneurs either, but he insists that women should be at the front operations in the business and not just at home because this will lead to quicker expansion.

He understands that many men do not share their personal or business aspirations with their wives and he tries to address this problem by involving women in business through various channels like approaching value chain actors or fulfilling formalities relating to taxation and other legalities.

As their role model Chinnapan admits to the other men that there is still a long way to go, but they can hasten the business growth process by joining hands with their wives. He also promises to share his personal stories about how his wife and he achieved their goals.

CARE India’s WLSME program trains role models and recognises the importance of men in the empowerment of women.