Sixteen year-old Suman and 15-year old Baiju from Piprakothi block of East Champaran district in Bihar had resigned to leading their lives as per a script written by autocratic family elders. They neither had the courage to challenge that, nor any other option. Both depended on the larger family who treated them as children who had to be guided on what to wear and eat, who to marry and when to have a child.

“ZLPP changed our lives by providing correct information through ASHAs/male/ female CARE facilitators via couple counselling & husband group meetings. Many doubts were answered and I got clarity on who to approach for what. Being a man, I am expected to shoulder responsibility of marriage and parenthood. Now I am well equipped to do so”

Baiju was the apple of his grandmothers’ eye. She doted on him and her wish was always his command. When she directed the family to find him a suitable bride, he did not so much as murmur in disagreement. Grandma was nearly 90 years of age and unlikely to see her 91st birthday. When she was shown a few photos of prospective brides, she zeroed in on Suman. Without delay the wedding was solemnised. Suman protested but her father explained his financial situation and told her that by marrying Baiju, who was not taking dowry, she would make it easier for him to settle his other children.

Although grandma passed away few days before the wedding, the families went ahead with the marriage Two days into the marriage and family members started enquiring about “good news” of a male child. Suman was aghast at this expectation, but did not have the courage to talk to Baiju. When the local ASHA didi came on the third day post their wedding, along with Vikas Kumar, the male facilitator for CARE’s Zero and Low Parity Pilot (ZLPP) and Bina, the female facilitator, she was intrigued as to why they wanted to meet and talk to her and Baiju. 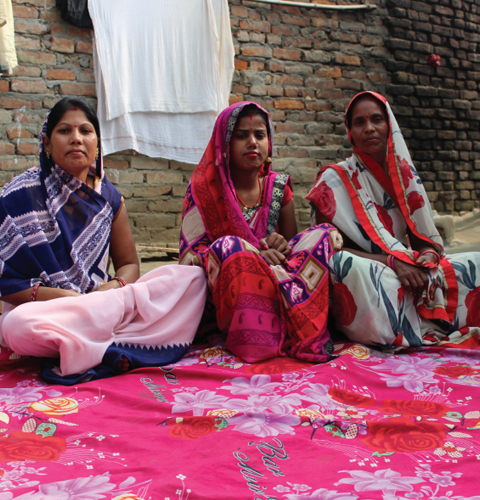 On the first combined visit, Bina had a casual conversation with Suman and Baiju. She asked him why he discontinued studies and urged him to take his Class VIII exams and then Class X. Baiju agreed that education was important and told her he would enrol in the local school’s evening classes. Suman too expressed keenness to pick up a vocational course so she could add to their financial kitty. The conversation was general and more in the nature of building rapport. Baiju’s parents also joined in.

In the next meeting, Baiju’s mother opened up and shared her story of how being married early affected her own growth. Also, dealing with Baiju’s father who had a bad temper was not easy. She admitted she had not been in favour of Baiju marrying before 18 years of age but was helpless at the hands of her dominating mother-in-law and husband. Meanwhile Vikas, the male facilitator spoke with Baiju’s father to understand his mind and was glad to see that he too was open to the idea of the children continuing with their studies.

Now was the time for ASHA to step in and counsel the young couple on delaying pregnancy. The context had been set and other family members sounded on helping the young couple deal with the major change in their lives – handling marriage, a joint family and other responsibilities, while preparing for a better future. When ASHA shared with Baiju and Suman the reasons why they must wait for few years before starting a family, they were receptive. Suman immediately understood that this was the right thing to do and that she needed to be stronger in spirit, body and mind to enter parenthood. Baiju loved his wife and he did not want her health to be compromised. When ASHA told him of the kind of complications that could arise for mother and child, he instantly agreed that they must do whatever it took to avoid such an exigency.

Roadmap for marital/ family goals with prospects of a better future

Once the couple was on the same page as the ASHA and male/female CARE facilitators, they were guided on different family planning options. Through discussions, photos, diagrams, audio visuals and case stories they were told about multiple methods, their efficacy and after effects so they could decide what was most appropriate to them. Not just this, ASHA also told them that she would continue to enquire how they were faring in case they wanted to switch to another method. If they had any questions they could reach out to her. Initially Baiju wanted to use condoms and asked her if she could get them since he felt awkward asking his male friends. Even the local medical shop or primary health care centre doctors were known to the family and they may crack a joke, making it uncomfortable for him.

ASHA assured them of confidentiality. They saw merit in the convenience of her bringing condoms to their doorstep. ASHA volunteered to take them to the health centre for more information. She told them how she had helped many couples delay child birth as per their age appropriateness and overall health conditions and later space children which was equally important.

Baiju was advised to start attending Husband group meetings to hear what others had to say. Indeed, he was one of the youngest husbands but that was not a deterrent. Those were forums meant for married men and he would learn a lot from there. Both Baiju and Suman realised how fortunate they were to get timely advice. Many young couples shared that had they received such advice immediately after marriage, they too would have delayed having their first child. Now Baiju and Suman could enjoy a few years of marriage, study and learn new things and then make an informed choice of parenthood when they were completely prepared and aware.

About the Programme: In 2018, CARE launch a first-of-its-kind intervention where CARE introduced gender and sexuality in family planning programme focusing on zero (couples with no children) and low parity couples (couples with one child). The decision was based on finding from Currently Married Women of Reproductive Age (CMWRA) study which indicated that use of contraceptives was low and unmet need for spacing methods had only marginally increased.

The pilot was started with three objectives: