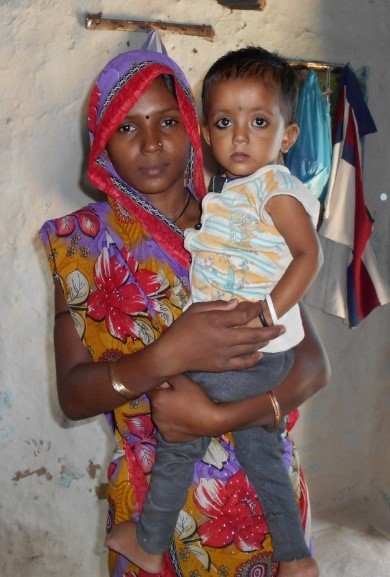 Pradeep with his mother

When MInu Bindua, CARE India’s frontline worker from Madhya Pradesh Nutrition Project (MPNP) met 10-days-old Pradeep, she was shocked to find the baby boy, severely malnourished and almost on the verge of collapsing. She immediately contacted other team members at CARE and they sprang into action and tried all means to save the boy’s life. Through early encounters, the team found out that Pradeep’s mother Rashmi was very weak herself since the pregnancy, resulting in the birth of a very weak and severely underweight boy.

Minu first heard about Pradeep through his grandmother Lad Kunwar, who spoke about his grandson’s deteriorating health. Seeing that the family had lost hopes of his survival, Minu and the CARE Team advised the family not to lose heart yet. Since this was Rashmi’s first born baby, CARE Team closely monitored the case and provided her specific guidance on how to take care of the baby, including exclusively breastfeeding to improve his condition.

The team started visiting the family regularly and continued their counseling and closely monitored the child. These consistent and collective efforts helped in improving his condition, but he was still not out of danger because he was still underweight, which was a cause for concern. Slowly and steadily, Pradeep’s condition showed more signs of improvement. CARE team’s regular visits and assistance helped Rashmi to take care of her son better which also helped in improving his nutritional status. Today Pradeep is a normal, healthy and active baby who successfully beat malnutrition. Looking back at her and her son’s tough journey, an elated Rashmi says, “We owe our child’s life to the CARE Team who helped saved his life.”

Pradeep’s story is similar to many others’ in their village Angor, in Bijawar block of Chhatarpur district, Madhya Pradesh. The quality of life and the nutritional status of children here still remains extremely poor. And, Angor isn’t the only village in the district with this problem. Numerous cases of malnutrition in children (between 0-5 years of age) have been reported from several neighboring villages. Ignorance and lack of awareness among the people about malnutrition has only worsened the situation.

Pradeep’s recovery is a victory for the MPNP team and a strong reminder that collective and consistent efforts can overcome any hurdle, however difficult it may seem.