Collective Marketing Of The Mahua Flower 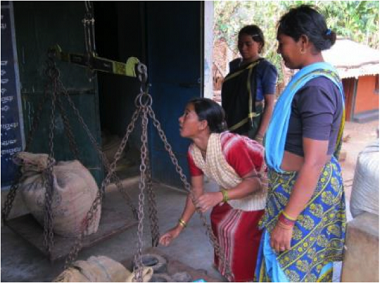 The Mahua flower is one of the major non-timber forest products (NTFP) available in Junagarh Block of Kalahandi district of Odisha (India). The Mahua flower is locally considered nature’s gift to poor families; for four months a year, poor families in the area rely on the Mahua flower as their primary source of income.  Women collect the flower from the forest near their villages, then dry and sell the flowers to village-level traders to add to their family income.

The Mahua flower is one of the raw materials used in preparing country liquor. Private breweries have been controlling trade of the Mahua flower in Junagarh for years.  In practice, the private breweries appoint village-level petty traders to procure Mahua flower on their behalf. Local traders monopolize an area of operation and primary collectors are forced to sell Mahua flowers at a lower price to them. No outside traders visit the villages for fear of harassment by the local village-level traders. These trade channels have perpetuated unfair trade practices to maximize business profits.

A collective marketing process for Mahua flower was initiated by CARE India in five Pathways project villages of Junagarh Block as an income enhancement intervention with the support of Karrtabya  (a Pathways partner NGO). In the process, female self-help group (SHG) members were sensitized about the benefits of aggregation and how to collectivize their produce and negotiate within the market for better prices.  Further trainings were given on the quality of Mahua flower and fair business practices, in order to reduce losses due to unfair trade activities. Women in the villages were excited by the concept of collective marketing and adopted an aggregation intervention for Mahua flowers.  By the end of the season, female group members were able to collectivize around 90 tons of Mahua flower and were ready to link with the higher level traders to negotiate their aggregated produce.

A Bhawanipatna-based trader showed interest in procuring stock from the villages at a price of Rs. 2050 (approximately 33 USD).  Angered by information that external traders were interfering in his trading geography, the local brewery manager tried to threaten the Bhawanipatna-based trader.  Despite the threats, the trader visited the villages and initiated procurement by paying the agreed price to the community.

Men in the community extended help to the SHG members and contributed by dividing responsibilities among them to smoothly carry out the intervention.  Men played an important role in overseeing the weighing process at the village-level when selling to the Bhawanipatna-based trader. The men volunteered to form an assembly line to ensure uniform packing in marking sacks. They also helped, when needed, by recording individual members’ contribution to aid in an even disbursal of money afterwards.  Apart from playing a critical role in weighing, packing, and record-keeping, the support of men in the villages was instrumental in giving women the necessary confidence to participate in collective income generating process.

The brewery manager reacted strongly to the Bhawanipatna-based trader’s success.  He conspired with local police who detained the trader’s vehicle loaded with Mahua flower in the Junagarh police station. Ultimately, the trader had to show his original documents to the police who freed his vehicle after one day.  Under this harassment, the Bhabanipattna-based trader became disinterested in the remaining produce from the villages.

The news of the brewery manager’s harassment of the Bhawanipatna-based trader spread rapidly across the villages. The villagers called a mass meeting and decided to refuse to sell to the private brewery.  After seeing the unity of the villagers, the manager visited the villages and apologized for the trouble and made a commitment to procure the entire produce at the rate of Rs. 2050 per quintal of Mahua flower.  Villagers stipulated that they will weigh the produce themselves in all subsequent transactions to avoid any unfair practices.  Instant payment was made by the brewery manager to the villages for the entire stock.

Villagers demonstrated their courage to stand united over issues regarding their livelihood. Women managed the collection and production of Mahua flower with the support from men, which led to the success of the intervention at the community level.  With this year’s success, group members are newly motivated and determined to proceed with collectivization practices in the years to come.