Community Knows What It Needs Best 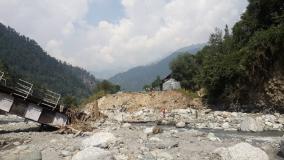 A village surrounded by mountains on all the sides may be awe-inspiring to some visitors but it can also be terribly lonely and unbelievably chilly. Belasalamabad is one of the villages of CARE India’s temporary shelter site lying close to the border of Baramulla district nearer the Uri sector. It is located at the very bottom of Shola Forests, in the Western Himalayas, not very far from India-Pakistan border. The temperatures here can go down to sub-zero levels. Working with CARE India, I visited Belasalamabad, one of the flood affected villages in the last district within India’s border in Kashmir. Generally, during disasters the affected community is made to accept what it is given and the theory that prevails is that ‘givers know better what is needed by the takers’. This is mainly due to the compulsions of urgency and providing speedy response. It is a time when one wants to give the best to the affected community. In the enthusiasm to look at the best practices elsewhere, at times, the affected community is not consulted. I, on the other hand had the privilege of hearing from one flood affected community in the foothills of Western Himalayas this week. The winter is approaching and mercury is dipping to sub optimal levels. I ventured to understand the community’s perspective on the design of a shelter which could give them immediate relief and insulate the community from harsh winters. I learned about community’s wisdom about the material used for construction being environment friendly, and at the same time should be of some use later on in building permanent houses. 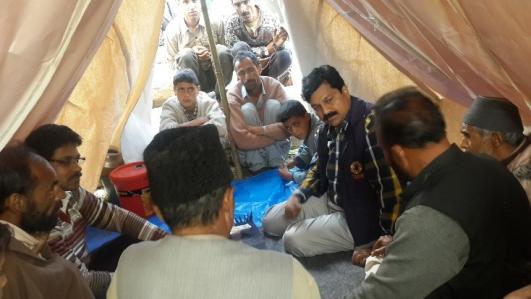 Their sensitivity towards women’s privacy was also evident through their suggestion for a separate room for them and facilities for individual toilets. Women and adolescent girls have been hard hit due to the disasters, and have been left without a home and the privacy it brings. They have to get up early in the morning for their ablutions and have to go out far away from the village. This obviously makes them feel vulnerable. The cold weather is especially punishing for children. It leaves them without adequate protection and takes away their focus from education, putting them at health risk in an area where the temperature hovers around zero. There are babies barely a few years month who have to brave such harsh conditions.

We gathered the community’s feedback to help  us tailor our response according to their needs. A consultation was held in the presence of the Panch (village head). Many ideas came from the community as they participated with gusto. The people drew for us a sketch describing the size and shape of a shelter suitable for them. They also came up with suggestions on the kind of material to be used, like galvanized sheets with ply wood interiors, insulated with thermocol. Much before going to shelter experts and design engineers, we already had a workable design and model. It made me understand the importance of consulting the users before coming to a decision. After all, the user community is the first and the primary stakeholder in any such situation. The model and design sketched by the community is winning laurels from the Government and receiving commendations from peer agencies as something worthy of emulation.

I came back reflecting strongly on how such consultations with community hold the answers to most of the development challenges currently faced by humankind. This is in line with what we do at CARE India. We put the community first in our development interventions and disaster response. Keeping in mind the needs of the community, CARE India has provided both non-food items and dry ration to the affected families in Baramulla and Pulwama Districts in Kashmir as part of the Jammu & Kashmir Flood Response Initiative.