A Counsellor, A Messenger, A Strong Leader 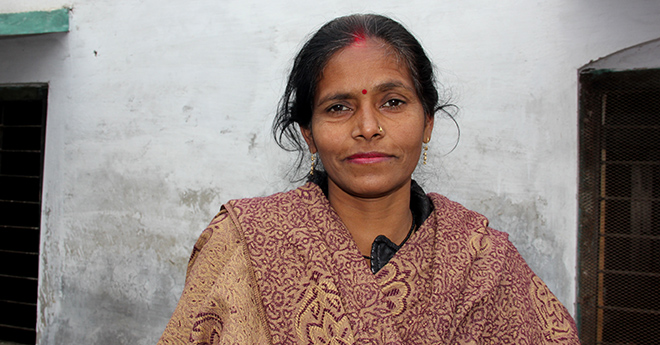 Usha Verma is an Anganwadi worker (AWW) in Fatehpur block of Uttar Pradesh. As an Anganwadi worker, her role is to counsel the villagers and impart important health information on issues such as family planning, warning signs of possible health issues, breastfeeding, and newborn care. Usha also helps provide vaccinations for adolescent girls groups.

Recently, Usha told a story to me in which she played a significant role: about a year ago in a nearby village, a man named Desh used to hit his wife if she tried coming to maternal health meetings, supported by Join my village and he also did not allow her to receive any vaccinations.

Usha visited Desh’s home and met with the couple, who are parents of two children – a boy and a girl, and asked them to come to the meeting just once. They eventually agreed to take part – and there has been no looking back. Usha and other Join My Village staff advised them on safe health practices by using flash cards and they gradually began to understand everything.

Usha shares with me the satisfaction she felt when Desh told her that he was wrong for hitting his wife, and even going so far as to thank Usha deeply for helping him change and believe in equality.

Desh and his wife aren’t the only couple who Usha has helped. Speaking of the couples she has counselled in the villages, Usha says “They were stubborn at the start, but slowly I have been able to convince them. Now on their own they come and ask me when to get the vaccinations, and themselves go and get the vaccinations on time.”

Usha is herself changed, she says she knows much more about health and hygiene now and finds herself to be more confident, strong and independent. “I go out more now, and since I have more information after being attached with Join My Village’s program, I am able to pass on this information to many others. The villagers come to me when they have all sorts of questions because by now they know that I have the relevant knowledge. Taking on this role of an adviser is a big positive change in my life” she says.

About Join My Village:
Join My Village supports and features CARE’s work in highly impoverished communities which aims to expand access to education to include both girls and boys, and to provide training programs that improve livelihoods and enrich the broader community.