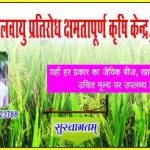 Basanti Tirkey is one of the beneficiaries of CARE India’s Where the Rainfalls (WtRF project)and a member of Bharat Mata Self-Help Group (SHG). She along with her husband  is one of the practitioners of climate resilient and organic cultivation. They underwent a training and received exposure on better agricultural practices by local agriculture department.

Basanti is a role model to other  farmers i her village, who come to see her kitchen garden, horticulture plantation and methods of rice cultivation. Considering Basanti’s potential, the project team selected her to set up a climate resilient agri-kiosk in Gowashi village with an initial three days training programme to the couple on advantages of climate resilient agri-kiosk, seed selection, benefits of organic fertilizer and pesticides, collection of input indenting from farmers, potential input suppliers for linkage building, maintenance of accounts and records and registers of sales. Initial support of INR 15,000 was provided by the project for maintaining seed storage facilities and record and registers. Basanti proudly claims that her agri-kiosk is providing climate resilient varieties of seed, organic fertilizer and pesticides to farmers from the nearby villages . She has effectively implemented many skills that she learnt in the training provided by CARE India. Her husband also extended a helping hand in this venture. She prepared a systematic indent of paddy and vegetable seed varieties, collected information about varieties, quantity of seed and the time when they are required by the farmers and procure them accordingly.

In the last Kharif season, Basanti procured paddy seeds at INR 1000 per 10 kg, against the marked price of INR 1105. She could avail this advantage only because of the linkages with dealers in Raipur.  Even the transportation of seed was provided by  the dealer. Basanti sold these seeds at INR 1100 to other farmers. This  was advantageous for Basanti and other farmers, in terms of opportunity costs saving which included the daily wages that would have to be foregone for procuring seeds, transportation costs, and their own conveyance costs. Basanti is very honest and she did not keep the price at which she procured the seeds against the price at which she was selling a secret before the other farmers. Farmers also cooperated with her in this process as they could still avail the advantage of getting the seeds at five rupees lower rate compared to open market seed price.

The expansion of her business and its potential has caught the attention of many traders. In fact, for wheat and vegetable crop in the subsequent season, she was approached by a trader to sell 6 quintals of maize seeds. The quality of the seeds was reliable and met the preference of the farmers. As such, she procured the seeds at INR 530 per 4 kg and sold the seeds at the same price to farmers from nearby villages including non-project villages. In turn she was assured of an incentive of  INR 1000 per quintal from the trader. She sold the stock of maize seeds that she had purchased in about a week’s time. The maize crop in that season made the farmers happy and strengthened Basanti’s reputation in the community. She has also earned a good amount of incentive which has motivated her to continue her business.

Basanti is well prepared to meet the need of the farmers in her surrounding villages by supplying stress tolerant and climate resilient variety seed to the farmers. Apart from supply of seed the kiosk is ready to offer multiple services; information about bio-fertilizers to be used and their recommended quantity depending on soil quality and land acreage, organic pesticides, seed in keeping with the choices of the farmers. All this was available at their doorstep. The kiosk is also offering an option  away from the exploitation of traders and middlemen, an option to have few more precious rupees in their pockets, to invest in their land, to make their families lead better lives, to look to a better future.