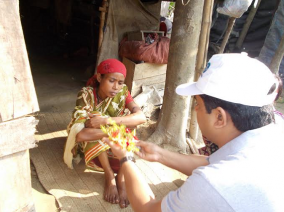 Petrapole is one of the areas where EMPHASIS intervention is being carried on. It is on the Indo-Bangladesh border, in the North 24 Parganas district of West Bengal. It is a four hours’ drive from Kolkata and I reached there just before noon. On my way, I picked up one of our outreach workers, Anita. She has been working in the Petrapole & Bangaon field area and is quite popular among the people there. We are on our way to Hasina’s house. The house is not completely a ‘Kaccha’ one, as the roof is made of tin sheets on four thick mud walls. I notice that surrounding of the house is quite clean. Anita stood in front of the main door and called in little loud voice….Ki go barite keu ache? Hasina….Oh !! Hasina… barite acho to? Dekho ami ashechi. (Is there anybody home? Hasina… Oh ! Hasina… are you at home? See, I have come). Immediately, we heard a feeble voice coming inside the house……. Ektu darao didi, ami ashchi. (Just wait sister, I am coming out). Hasina came out of her home with a smile on her face and immediately got busy in arranging seats for us. I told Hasina not to worry and asked if she could recognize me? She quickly replied, “Of course! You have come here before”. I asked her how she was; to which she replied that she was better than before. Hasina Mondal is 27 years old. She was married to Bablu Munsi of Majipur village in Jessore district of Bangladesh. For seven years, she faced constant atrocities and violence by her husband. When she could not take it any longer, she left her in-laws place and returned to her parent’s house at Petrapole. Here, Hasina got married to Amir Mondal, a truck driver by profession. Soon after their marriage, they left for Nasik together. After staying for a few months there, she returned to Petrapole with her husband. When Hasina was in her seventh month of pregnancy, her husband, Amir Mondal, left her and went to Nasik. Ever since, she has been living with her parents in Kalabagan area of Petrapole. When Anita met Hasina for the first time at her house, Hasina looked very pale, thin and weak. She had an ulcer on her face. Her eyes had a sunken look and there were black patches under her eyes. Seeing her condition, Anita counselled her and requested her to get tested for HIV+, at the nearby Bangaon Hospital. Hasina then shared that she had already taken the test and was identified to be HIV+. She completely broke down while taking about it. She was scared that if she dies who would look after her daughter. While talking to Hasina, we got to know that she was infected with this deadly virus from her second husband, who used to fall sick quite often. Hasina also told Anita that she unsuccessfully tried to contact her husband many times. 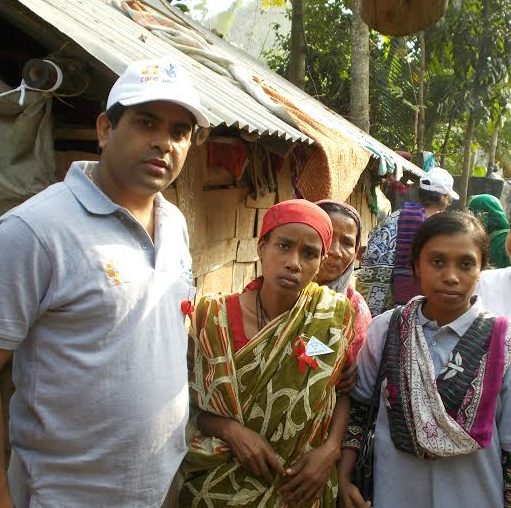 Anita suggested to Hasina that she should go to R.G. Kar Medical College in Kolkata for further testing & treatment. Initially, Hasina refused, but later, with persistent counselling by Anita, she agreed to go if her elder sister allowed. On the 28th of November 2013, Anita took Hasina Mondal to R.G. Kar Medical College, Kolkata and she was tested for CD4 and TB- DoT. On 2nd December 2013, Hasina took all the necessary tests and the report showed that her CD4 count was only 68. Again on 6th December 2013, Anita took Hasina to the Medical College, where an ART (Antiretroviral treatment) counsellor provided necessary counselling to Hasina and started her ART. Anita provided Hasina all the important contact numbers of ICTC counsellor and other health staff, so that if she undergoes any medical complication due to the ART medicine she can directly talk to them. Anita’s responsibilities did not end there. She then linked Hasina to the Network of North 24 Parganas Positive People (NNP+) at Barasat so that Hasina & her daughter can get regular nutritional and psychological support. Hasina looks healthier now and is taking her ART regularly. She is also working and contributing to her family income. She has become a member of Petrapole Kalabagan Women Group and attends regular EMPHASIS monthly meetings. She also shares her experience with other women and adolescent girls, to generate awareness about HIV & AIDS. To Hasina, having HIV+ is not the end of one’s life; rather it makes a person more conscious about his/her health & generates a new hope to live a healthy life. Hasina says, “Thanks to the EMPHASIS team & CARE for bringing positive changes in my life, so that I am able to live as normal a life as others”. -Surajit Chakraborty Partnership Coordinator EMPHASIS Project CARE India