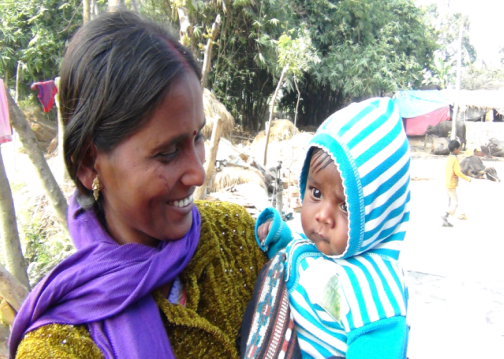 In the most stirring crisis, a single story can tell us everything we need to know. Two weeks back I visited a remote block of Panna district in Madhya Pradesh where CARE India’s, ‘Newborn Survival’ project is underway. Usually hospitals in the region are overcrowded, with very limited staff, and most newborns in these hospitals are vulnerable. Many children are born with low weight which minimises their chances of survival and most people in the area do not have access to basic quality healthcare.

While in the village, I got a chance to meet a mother-son duo and their story was extremely inspiring. Little Sonu was born to Badi Bahu, who is an active member of the Mother’s Group, instituted as a community birth preparedness platform in CARE India’s Newborn Survival Project in the region. Badi Bahu (28) had become an experienced mother when she had her first baby boy, four years back. During her second pregnancy, she was confident that she nor her baby would face any problems. Unfortunately, her second baby, Sonu, was born less than 1.5 kilograms, he was very malnourished, underweight, and with bleak chances of survival.

The poor health condition of the child was identified during CARE India’s ASHA Coordinator’s routine home visit to Badi Bahu. During her first visit, the coordinator, Eram Jabi, immediately recognised practices within the household that could be detrimental to the health of Sonu. She explained that during her first visit, the newborn was hanging on to life by a thread and was battling severe internal infections due to impaired immune functions. She noticed that Badi Bahu was regularly feeding her child water, and was irregular in practicing exclusive breastfeeding. When urged, she told the ASHA Coordinator that their community did not practice exclusive breastfeeding, and she felt no urgent need for it either. However, the ASHA Coordinator was aware of the exigency of the situation, and counselled Badi Bahu and her family members to initiate exclusive breastfeeding and to practice Kangaroo Mother Care (a method of care practiced on babies, usually on a preterm infant, where the infant is held skin-to-skin with his mother).

Badi Bahu faced resistance from her father-in-law but the ASHA Coordinator persistently encouraged her to continue breast feeding to save her child’s life. The following day, the ASHA worker returned with another new mother, who had also given birth to a low weight baby, and was able to improve his condition markedly by practicing Kangaroo Mother Care and exclusive breastfeeding. Through the ASHA Coordinator’s regular follow ups, she gradually saw Sonu recover. The recovery was initially slow, as he gained less than one kilogram during the next few months. On reaching six months of age, the nutrition staff introduced complimentary food as well. During her most recent visit, the ASHA Coordinator recorded the baby’s weight at a healthy 3.2 kgs.