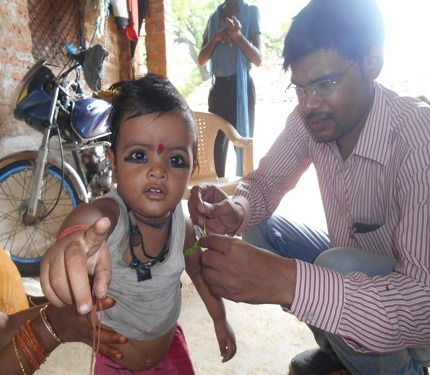 The story from the village is unbelievable.

Rajnagar block is situated 50 kms from Chattarpur district headquarters. Khajuraho which is famous worldwide for its history, architecture and natural beauty comes within Rajnagar Block. While Rajnagar enjoys a great recognition for various reasons, Kurela, a village with population of 2600, located 22 kilometers away from Rajnagar is fighting malnutrition which is worsened by hunger, poverty and inflation.

The small village had families with 16 Severely Acute Malnourished (SAM) children who were away from the word development. The families did understand their betterment and thus looked for some guidance.

To ensure some concrete steps are taken for the betterment of these children. Local authorities and CARE India field staff took initiatives to help them get over malnutrition.

Mobilization was done to send children to the Nutrition Rehabilitation Centers (NRCs) where they were well looked after and returned in good health. Out of many children and families the story that touched my heart was of a mother, who was living in guilt. She gave birth to a beautiful baby but was incapable to feed the child to fulfill his hunger. Her and her child‘s condition was deteriorating due to ill treatment from her mother in law and lack of nutrition.

The family tried all local remedies to ensure she gets help but with failure, leaving the family with no hope and the mother in despair. It was during these struggling times that CARE India’s block leader visited the family. He spoke to all family members in person to understand the root cause of this issue. Later he connected the family with the Anganwadi Worker and ASHA who visited the family and counselled the mother of the correct methods of cooking, eating and feeding, resulting in improvements in the mother’s heath where she was able to feed the child.

By connecting the malnourished children to the NRC , connecting the ASHA workers and health workers with support from local authorities to the families, and by conducting regular health checkups, a lot of improvement was seen in the nutritional status of the  identified 16 children of the same village. To ensure the village like these are mobilized and sensitized further intervention was planned like having regular “Convergence meetings”- “Baithak” at the gram panchayat level with the participation of  various govt. departments (PHE, TSC, Health and ICDS) for discussing issues of NRC referral, safe drinking water, health & sanitation issues. It was followed by folk shows (nukkad natak), and other meetings at block level. As I write this blog I am glad to report that 4 children who were not willing to go the NRC were admitted to NRC and are recovering as per expectations. These children are living a healthy and fulfilled life.

It is not the nutrition that is vital but living a life of full potential which is important. Today I feel very satisfied and happy to see these families leading a healthy life.