Find a Way or Make One 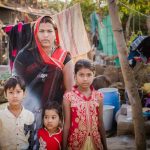 Anita belongs to Aladakhedi village, Sehore district, Madhya Pradesh. She lives with her husband and three children-two daughters (aged nine and seven) and a five year old son. Her husband is a construction worker and needs to leave very early in the morning to get to work. In case he gets late, he loses the day’s wage. As he leaves very early, he is never there to help Anita with her household chores.

Anita used to struggle a lot to get her daily work done. She used to wakes up  very every day to prepare food for the family, dress and feed the children so that they could leave for school. Apart from this, she also took care of buffaloes, milk them and get water from a distant location – where the supply came only early morning. As all this work needed to be done alone by Anita within a very short span of time every morning, the pressure was immense on her.  This was leading to increased number of domestic fights between her husband and her.

CARE India started PACE curriculum in Anita’s. She got involved with the Learning Group that was formed. She became interested in the information that she was getting but her stress did not abate. Then one day when the communication session was in progress, she learnt the manner of communication and how she could effectively leverage it to her advantage. She also realized where she needed to change, and that it was her stress that had changed the tone of her communication.

But this did not solve her problem. Her work load remained the same and she had to do something about it. One day she gathered courage and confronted her husband. He immediately said that it is not man’s work to do domestic work and shunned her. Anita did not give up and kept requesting him to help her in atleast getting water every morning. Her husband hesitantly accepted the request.  Then one day her father-in-law said that he will bring the fodder for the cattle daily.

Life is not the same for Anita now as she is stress free and is able to do her work more efficiently with the support she gets from her spouse and father-in-law. All this was possible with the guidance and motivation she got from the Learning Group sessions. She has also adopted the WASH practices that were taught and has been practicing them well.

There are many more women in her village facing similar challenges and want to help them to overcome this problem. For such women, Anita has become a role model.

She also learnt to use  stitching machine. She wants to enhance her livelihood opportunities by doing stitching work. Her dream is to construct her house and have more cattle to improve the livelihood of her family.