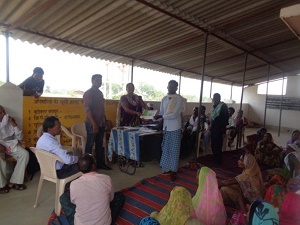 Government of India has set itself an ambitious target to cover 140 million farmers by 2017 under soil health card scheme. The scheme is aimed at helping the farmers get the soil health of their individual farms tested, and recommending application of fertilizers and nutrients as per the requirement of individual farms to help farmers improve productivity through judicious use of inputs. To achieve this ambitious target, all the key stakeholders will have to provide necessary support to the government of the day.

In Chhattisgarh 44% of the target set for the state has been achieved. However, remote villages especially situated in the tribal belt of the state are still to get any benefit from this scheme. CARE India is planning to extend the benefits of the scheme to these remotest locations. Under its project ‘Where the Rain Falls’ in Jashpur district, Chhattisgarh, CARE India has developed a partnership with district’s Krishi Vigyan Kendra (Farm Science Centre) to reach out to the farmers and sensitize them on the importance of Soil Health test through Farmer Field School (FFS) established under the project.

CARE India also organized a session at FFS with farmers to understand the barrier faced by them in availing the benefits of soil health card scheme. The following points came out during the session (1) farmers have no knowledge on the importance of soil testing, (2) Wherever soil testing was conducted, it was done in grid (10-15 acre of land) and received single soil health card for the entire grid, but recommendation and advise for individual farmer was not given (3) There was a delay in distribution of soil health cards, hence farmers couldn’t benefit (4) farmers lack basic knowledge to interpret result and recommendation from the testing.

After identifying the barriers, CARE decided to (1) build awareness among farmers on the benefits of soil health card, (2) collecting sample from individual farmers (3) carrying out the test before monsoon season and sharing results with farmers before the crop season (4) using the report for crop planning to make this process sustainable, CARE also promoted Village Development Committee (VDC) at local levels and selected volunteers, who were trained by Krishi Vigyan Kendra(KVK) to act as technical experts collecting samples and interpreting results.

Volunteers collected soil samples from fields and with support from CARE the samples reached soil test laboratory of KVK, further GPS marking was also carried out to do field validation for individual farmers. The findings of soil testing were disseminated through farmers’ meeting organized at every village. Soil scientist from Krishi Vigyan Kendras (KVK) shared findings and results of soil test done and provided soil health advisory to individual farmers.

CARE in partnership with KVK supported over 200 Adivasi farmers to test their soil before the Kharif season, and based on the results the project also identified farmers who are in need of various seeds, bio manure, and fertilizers and assisted them in crop planning.

After witnessing the benefits of soil health card scheme, more farmers from the tribal belt of Chhattisgarh have come forward to participate and avail the benefits of this scheme.

Representative of KVK thanked CARE for popularizing the scheme and helping farmers avail its benefit.