How a stove changed her life

Mestriyamma used to wake up at 4am every day to cook for her family of 12, consisting her husband, their two children and the couple’s eight brothers. Their house in Kodigehalli slum in Bangalore is simply a large hall with no separate kitchen or attached bathroom. And so, she would cook outside the house every morning and evening. 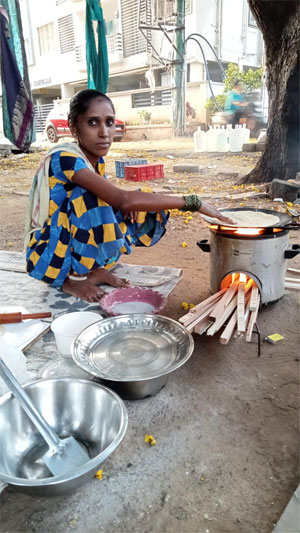 Daily, her husband, Shankrappa and their brothers would leave home for construction work at 7am, before which being the only adult woman in the house, Mestriyamma had to keep breakfast ready. This mostly consisted of rice and sambar. For dinner, she routinely prepared vegetables, rotis and rice. Cooking for 12 people, day after day was a huge task for Mestriyamma. She would have to cook 4kg of rice in the morning and 50 rotis for dinner alone!

One day, she participated in a cooking camp organised under the Bachat Hasiru Jivanakke, where Mestriyamma was encouraged to evaluate her cooking facility and made aware of the health and economic impacts of traditional cooking methods. She and numerous other women participants learnt about Improved Cook Stoves (ICS), their myriad benefits and the do’s and don’ts when using these stoves for cooking. The various stove models were exhibited and the women participants were given a demonstration on how to use them. This way, they got the opportunity to gain hands-on experience with the stoves before actually selecting one for their homes. This also helped reduce their initial scepticism about adopting a new cooking stove.

Mestriyamma attended several SHE school sessions, which helped her realise that adopting an ICS would change her life forever. For her home, she chose the Greenway Jumbo model that would suit the meal requirements of the large family.

Not long after bringing home the Greenway Jumbo cooking stove, Mestriyamma discovered that her cooking time had lessened. As a result, she could sleep an extra hour in the morning, and wake up in good time to prepare breakfast for her family. She also observed that compared to the 6-8kg of wood that the previous stove consumed, the ICS consumed only 3-4kg. This helped the family save on the cost of fuel, which earlier went up to Rs.4,000 a month.

In addition, the lady of the house no longer had to suffer and inhale the massive amount of smoke released by the traditional stove and is happy to be liberated from it.

Mestriyamma now has more time to herself and has extra money to spend or save, as she pleases, thanks to her new and improved cooking stove. While cooking for 12 people is still a colossal daily task for her, it doesn’t feel as colossal now.

About the Programme: The Bachat Hasiru Jivanakke project focuses on enabling poor households to switch from traditional cooking practices to clean and environment-friendly alternatives, like ICS. The initiative is being carried out in and around Bengaluru. Through cooking camps, the communities are being made aware and motivated to observe and analyse the performance of different cookstoves.