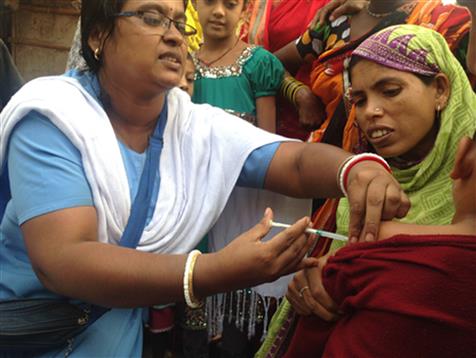 With 51 lakh people, East Chamaparan is one of the largest and most populous districts of Bihar. Each block primarily has one designated Primary Health Centre (PHC); which is often the only public health facility in the block that is open all days of the week and provides basic curative and obstetric services. These PHCs are also stocked with vaccine storage equipment and often serve as a hub for managing the immunization program’s outreach activities. Special emphasis is being given to immunization in the district since prevents a range of diseases and subsequently infant mortality.

With continuous advocacy, planning and implementation support by CARE India, a momentum picked up amongst local partners to make these PHCs operational. However, in order to reach full operationalization, there were a number of challenges.

Out of the seven PHCs only four had proper infrastructure which too required major renovations. Five PHCs which had their own building did not have any electricity supply or other much-needed sources of back-up power supply. Furthermore, there was no dedicated administrative head (the Medical-Officer-In-charge) at these PHCs and no block level team of managers (also known as Block Program management Unit).

Since the vaccination outreach program was not working effectively in these PHCs, support by five different neighbouring PHCs was required. There was no equipment for storage of vaccine in cold chain in any of these seven PHCs, which imposed another major challenge on delivering the vaccination outreach programs and a cold chain had to be established on a high priority.

As first step, it was decided that the best way to make the seven PHCs functional would be by establishing vaccine storage cold chain point across all of them and appointing a health administration dedicated Medical-Officers-in-Charge.

Subsequently, the process for repairing the buildings and providing electricity connections was initiated. In early 2015, nearly after 18 months of intensive work, six PHCs became fully functional. The last PHC continues to be occupied by the government functionaries and this issue will be resolved soon.

The six newly functional PHCS have a fully functional cold chain point and are managing the immunization outreach services in all villages of their catchment area. There is a now an effective mechanism to manage, monitor and review the vaccination activity on a regular basis.

Through Government of India’s supplies of cold chain equipment, the State Health Department of Bihar also provided an ice-lined-refrigerator and deep-freezer on priority to each of these seven PHCs.

As a result of this successful intervention, the immunization coverage in the district is now increasing steadily, starting from the catchment areas of these seven PHCs. The data shows an increase from 29% to 47% in these seven blocks of the year 2014 to 2015.