Improved agricultural practices helped in putting an end to migration 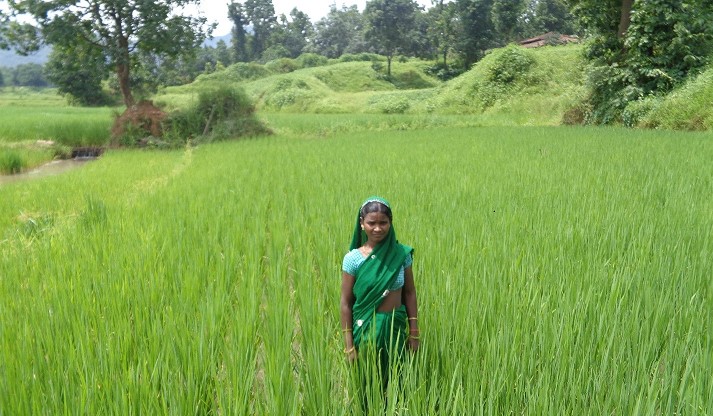 23-year-old Sunita Bai, an Adivasi woman farmer from tribal dominated Jabla village, Jashpur district in Chhattisgarh was facing tough financial situation for many years, especially due to limited crop produce on her farm land, and absence of any other livelihood avenues in the village.

Sunita lives with her husband, two and half year-old son, brother-in-law and mother-in-law. The family has struggled hard to meet the food requirement of every member, and is heavily dependent on local moneylenders for any assistance, including marriage and medical ailments.

Sunita would mostly work as a domestic help, or wage laborer to meet the requirements of the family. Her husband would often go outside Chhattisgarh, to look for work.

During her husband’s absence, Sunita had to take care of her son, cook for family members, work as a wage labourer, and work on the land apart from the usual household chores. “More responsibilities would pile up, when my husband would go to other states looking for work,” said Sunita.

However, her association with CARE India’s Where the Rainfall (WtRF) project in 2015 changed a lot for her and her family. Financial conditions improved once Sunita joined the village self-help group (SHG) and Village Development Committee (VDC), and received support on adopting improved agricultural practices such as system of rice intensification (SRI) in paddy cultivation. Through this, Sunita was able to pay off family owned loans and also managed to put a end to her husband’s frequent migration to other states in search of work.

Describing her journey with CARE India’s WtRF interventions, Sunita said, “When I was facing some of the most difficult days in my life, the animator and the block coordinator for the village visited us and informed us about the project. They inspired me to join the SHG and subsequently I became a member of Maa Durga SHG and the VDC. I learnt about SRI in paddy cultivation/line transplantation and its various methods. I managed to save Rs 3000 in my SHG, and took a loan of Rs 1000 for other medical expenses of family members”.

“I practiced SRI paddy cultivation twice during 2015-16. Out of 90 decimals, I cultivated SRI paddy in only 30 decimals of land. I was unable to adopt SRI in the rest of the land due to its unlevelled nature and scarcity of water. I transplanted 7-day-old seedlings, applied cono-weeder, used vermi-compost, and managed to produce 15 quintals of paddy, against the usual 7 quintals through traditional methods,” she added.

The project also facilitated soil testing of Sunita’s land this year through Krishi Vigan Kendra (Farm Science Centre), Dumar Bahar, following which she used organic manure as per suggestions. This year she changed the paddy variety and used an improved paddy variety known as Pratikshya. She has undertaken weeding twice this time and is optimistic to get good production again this year.

She is now motivating other women farmers of her village to adopt SRI during the SHG and VDC meetings.