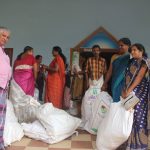 The recent floods in Kerala were the worst in living memory. In fact, so distant was the last such event, that people never believed that floods and landslides could be so devastating. Unlike many parts of India, houses are not clustered in one location, but built on hewn out hillsides as a single dwelling, providing households with private spaces and sometimes space for kitchen gardens. While all houses have Pucca roof, the poorer use ash-bricks as building blocks for their houses. During that eventful week of August, the rich and poor were equally affected as their calm world came tumbling down, swept away with the landslides that followed the heavy rains. Many lives were lost, some did not heed the warning of the officials to evacuate, while some did not get them at all. There was disbelief and shock, still on the faces of the people, when we visited them in the temporary camps about a week after. The older people and children were struggling. Thankfully, the Kerala government cleaned and re-opened the schools, thereby providing a much-needed peer and community connections to the school going, children.

The CARE India Team went on with their tasks as usual. We knew that time was of the essence and my effort as Team Leader was to ensure that the planning was done well, understood by each member of the extended team (we worked with a local partner) and implement them as per plan. All the time being on the lookout for signs of stress and burnout within the team. The team performed admirably and exceeded expectations under the difficult circumstances. We were supported by the HR unit which provided a lot of psychological support and the DM Unit, providing back up support as well as from the Local Program Hub based in Chennai. We worked as a motivated team, all the time soaking inspiration from the communities and families who had lost so much but still smiled, helped each other and warmly accepted us, wherever we went, in spite of the difference in languages and pauses for translation (especially for me).

I had heard so much about the quality of the Gram Panchayats in Kerala, and I did see it in action during the relief distribution. They were organized and deputed ward members to support us in planning, providing spaces and in maintaining order during relief kit distribution, which went off like clockwork. The District Administration in Idukki was quick to support our effort, with open telephone lines, regular meetings and critical information about damage. There were numerous NGOs involved in relief work.

In the course of two weeks of my deployment, we were able to distribute relief kits to over 400 severely affected families and identified another 300 families for the next phase of relief and recovery. It was a great and humbling experience in the beautiful locales of Gods own Country. So far, we have distributed 1800 family kits, 1991 shelter kits and 1997 WASH kits in the region.