Instilling a will to live 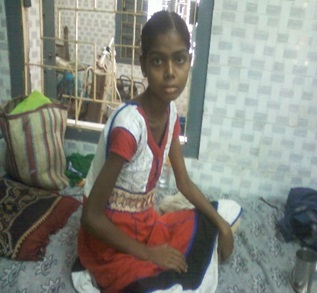 Selina Khatun’s life has not been anything short of a battlefield. It all started after she lost both her parents and by the time she was 14 she was constantly shuffling between her grandparents’ and her two sisters. There was no stability in her life.

By the age of 18, she was diagnosed with Multi Drug Resistant Tuberculosis. This was a result of her initial non adherence to the DOTS (Directly Observed Treatment Short-course) following her first diagnosis of Tuberculosis.

As part of the treatment, she was assigned a social counsellor, Manali, who was a social counsellor with the project, “Treatment Adherence and follow up of MDR TB patients” run by CARE India and supported by Lilly MDR TB. On their first meeting, the social counsellor realised how emotionally and physically weak Selina was. Her economic condition was never a secret but Selina’s helplessness and emotional vulnerability came as a surprise to her counsellor. It was a major cause for concern because the course of the treatment required the family to not only be vigilant with her, but also provide the emotional support.

A few days after the treatment started, Manali was informed that Selina had stopped taking her medication; this was despite the family being well informed about the importance of adherence to the treatment. Manali decided to go and see Selina in person, and during their meeting Selina broke down and admitted to Manali how she felt, like there was nobody to support her. She had started believing that without her parents’ support, she will not be able to fight the disease alone.

Manali tried to console her and reassure her that she was not helpless; her sisters really care about her and are always there for her. She also tried to make Selina mentally stronger, she explained to her that challenges are an integral part of life, but that doesn’t mean that she should succumb to them, she has to fight and overcome those challenges, and she will emerge stronger.

Manali realized that Selina’s economic vulnerability was acting like an obstacle in her path to recovery, so she decided to seek financial help from the Panchayat. The Panchayat assured her that they would help Selina with their own funds. Even after she left, Manali kept on monitoring Selina’s progress When she met Selina again, she noticed that Selina was more optimistic and was adhering to the treatment. Selina thanked her for all the support that has provided Selina with the strength to fight. Selina even admitted to Manali that she was feeling much better and most importantly, she wanted to live now.

CARE India’s initiative with Lilly MDR TB, in West Bengal has been working tirelessly to battle TB in the state. The program with their social counsellors also provides emotional support to the patients and helps them cope with the treatment process.