Instilling hope of a brighter tomorrow 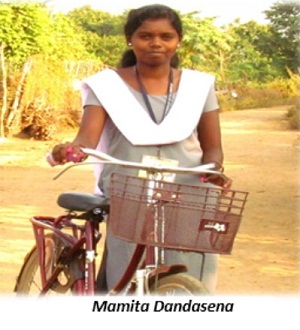 Radna Dandsena and Mamita Dandsena both 16-year-old, are the first two girls from Odisha’s Sargiguda village in Kalahandi district to attend college. Setting a brilliant example for other aspirational girls from their village, both girls are now happily pursuing their higher education in college. While Radna has got enrolled at Bhawanipatna’s Women’s College, Mamita is attending the Government Autonomous College.

Their achievement is a milestone for Sargiguda, located 13 kms away from Bhawanipatna in Kalahandi, a district with 46.68 percent female literacy rate (2011 census) and 62.71 percent of population living below the poverty line (1997 BPL census).

Like other parents in the village, who lacked interest in education girls, parents of both Radna and Mamita considered them a liability till their marriage.

However, parents of both the girls are extremely proud and hopeful about the future of their daughter now.

“We remained deprived of the bliss of education. But we want our daughter to be highly educated and progressive. That will make their life better”, said Mamita’s mother, Baidehi

“They will be able to read and write. It will be helpful for their future,” added Radna’s mother, Nrupati.

Radna’s and Mamita’s struggle to claim their right to higher education was especially tough due to the social beliefs in the community. Most of the families in Sargiguda belong to the Gond tribe and are extremely rooted in their faith, social culture and customs. Earlier, the community was extremely rigid on getting the girls married early. Parents were more reluctant to let their daughters pursue college education since the nearest colleges are located 13 km away from the village.

The journey from the village’s staunch beliefs to the village’s first girls getting enrolled in college began with the Pathways Project by Jana Kalyan Sanstha with support from CARE India. The project empowered the women in the village financially and educated them on the importance of higher education for their daughters.

In September 2014, members from self-help groups along with other women in the village come together as a Reflect Circle – a forum facilitated by CARE India that discussed and addressed the issues in a collective and organized manner.  Hindrances in higher education for girls emerged as one of the major problem in these meetings. Sensitized by the Pathways project, the Reflect Circle members stressed on addressing this issue on priority basis.

The initiative commenced with extending support to Mamita and Radna by convincing their parents. Through the intervention of Pathways project team, perception of the community started changing slowly. Regular sensitization sessions and activities made the community think over the importance to gender equality and girl’s education.

While both girls are happily attending their colleges, the acceptance for girls’ education is still a distant dream for Sargiguda. Most parents are still hesitant to let their daughters step out and pursue education. Yet, the Reflect Circle members continue with their efforts to bring about the change, because for them, Radna’s and Mamita’s stories are just the first few step towards empowerment of girls in the village.