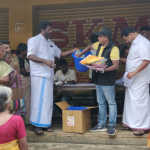 During the recent floods in Kerala, the state witnessed hundreds of fishermen reaching out to the remotest of areas where flood victims were stuck, utilising their own resources. Over the years, disaster sites across India have seen neighbours, communities and the grassroot NGOs present locally as the first responders with immediate support while the government machinery is mobilised for search and rescue and setting up of relief camps. Disasters and crisis events have repeatedly highlighted that those closest to affected people are the first ones who respond the fastest irrespective of whether they have formal training in emergency response. It is a well-recognised and accepted fact that local people, community based organisations and local NGOs play a significant role in saving lives and meeting immediate needs of people affected by disasters. They understand the context, resources and gaps better than anyone else. Also, it is the local actors who will responds to an emergency irrespective of how small the scale is. A small-scale crisis that may never feature on the radar of an international humanitarian organisation would still need response and life-saving emergency assistance and this need will be met by none other than local actors.

Globally, UN organisations, the Red Cross movement, donors and civil society organisations have endorsed the grand bargain—a set of commitments across 10 thematic workstreams aimed at improving the effectiveness of humanitarian aid. Recognising that local actors have long been side-lined during responses, organisations committed to enhancing humanitarian effectiveness and efficiency are increasingly laying emphasis on localisation. This seeks to reassert the legitimacy and prominence of local actors in terms of visibility and operating space. In peace time, capacity building of local actors through regular meetings, establishing platforms to voice their opinions and share experiences, keeping them informed on emerging global trends, seeking inputs during design stage to implementation and provisioning for management and operational costs of local actors are some of the newer ways of working.

Despite the commitment to localising aid, not many donors are forthcoming in funding disaster preparedness and capacity building interventions. Thus, there is limited trust on local capacities to deliver humanitarian aid effectively. Such investments are necessary for stronger systems and capacities of local actors.

Simultaneously, arguments on the national identity of certain cross-border NGOs have unfortunately shifted the focus from the core purpose of enhancing the commitment to localisation. The emphasis should be on whether the local actors are being empowered through capacity building and better financing partnerships in this process, or not. Donors need to reflect on the number of channels through which funding is being routed to the local people, and all efforts should be made to make it as direct as possible. Capacities of local civil society organisations need to be strengthened, enabling them to hold public and private sector organisations accountable and advocate for rights and entitlements of the locals. Another challenge that affects efficiency is that even for existing local development partners of an international organisation, getting funds for emergency response is a mammoth task. This is becoming a critical aspect which requires flexible granting as well as support from authorities to address this challenge.

The following action points can make a huge difference in enhancing the effectiveness and efficiency of humanitarian aid, and in improving the lives of people at risk through local support: