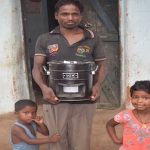 Cooking over a traditional open fire or mud stove can cause increased health problems due to smoke, particularly lung, eye ailments and birth defects. Health problems associated with cooking using biomass in traditional stoves affect women and children most strongly.

Ms. Mamta Chauhan was one of  our project participants from Narayanpur village, Kunkuri, Jashpur Chhattisgarh.  She lived with two children and her husband. The family’s source of income was daily wages and farming which they do on a  small piece of land. Being ignorant about clean cooking options earlier,  Mamta had no other option than depending on traditional cook stove. She had to walk for three to four  kilometeres to gather sufficient amount of firewood from the forest.

A SHE (Sustainable Household Energy) school was formed with 20 women from two SHGs to function as a platform for learning, practicing and promoting clean energy options. Mamta Chouhan was a very active member of SHE school. She used to attend every session and actively participated and deliberated on the pros and cons of Improved cook stoves among other SHE school members and  her neighborhood. She used to advocate for ICS as a clean cooking option.

She was not able to purchase an ICS herself due to very bad economic situation.  She discussed with her self-help group members for utilizing group saving and some of the group members were ready to do inter loan for purchasing an ICS however it was not possible to withdraw the amount due to consensus from every member from the group.

After couple of months, she died due to some health issues and her dream to own an ICS could not  be fulfilled. Her husband kept her dream alive and put Mamta’s dream among other SHG members. He urged other members to adopt an ICS which saves fuel wood, produces less smoke in the kitchen and saves times.  He shared with other memberes, ” There is possibility of loss of my wife due to indoor air pollution”. All the group member realized the importance of an ICS and purchased ICS using their savings.

While talking to CARE teamMamta’s husband, Mr. Kamal Ram Chouhan shared, “I fulfilled the commitment to have an ICS in Kitchen as a clean cooking solution. But I am extremely sad that I could afford it on after my wife passed away.”

CARE India’s SWITCH-Asia II Improved Cook Stove (ICS) initiative is an attempt to set up a Women-centred Extension Model for Adoption of ICS among FDHs and is being implemented by CARE India and CARE France and is funded by the European Union (EU).