Mastering the skills to survive seasonal droughts in Ethiopia 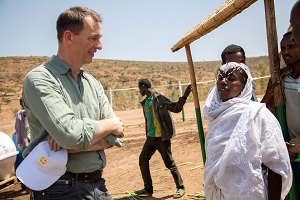 Last week I visited CARE Ethiopia’s field office in East Haraghe to witness first-hand the impact of the El Niño drought in east Ethiopia. I had the chance to meet with members of CARE’s Village Savings and Loans Associations, among them a determined young woman called Tuba Alyi.

The current El Niño phenomenon is one of the strongest on record, disturbing weather patterns across the world, and bringing the worst drought in 30 years to Ethiopia.

At 32, Tuba Alyi was born in the year of Ethiopia’s biggest famine in 1984. She is probably lucky to have survived her infant years, and has gone through countless periods of drought since then. This one however, is a particularly tough one.

The day before we met, Tuba had prepared her last reserve of sorghum to feed her three children, and today she has come to CARE’s food distribution site to receive a monthly ration.  Like many of her friends in the community, Tuba has had to reduce her food intake from three meals per day, to only one or two.

Reducing the number of daily meals involves a serious risk of lasting health problems and stunted development in children. During my visit I also met with Ginia, who had come with her four-year-old malnourished daughter Kumi to a nutrition treatment centre supported by CARE. Without treatment, this child would perhaps never reach its full potential. Immediate therapeutic feeding will reduce that risk, but it would have been so much better if she had not been malnourished in the first place.

The last two harvests have failed in East Hararghe, the region in east Ethiopia where Tuba and Ginia live with their family. Crop production fell by a staggering 70% in this area – while others have fared much worse. More than 460,000 people are in need of food aid in this sub-region alone, and 28,000 children show signs of malnutrition.

Despite the challenges she faces, Tuba is full of energy and optimistic for her future. She is one of the thousands of members who take part in the Village Savings and Loans Associations (VSLAs) that have been formed by CARE and our partners.

These groups, composed mostly of women, collect small savings in a collective savings box. Members of the association can take out loans against these savings for investments in business, or they can be used as an emergency contribution in times of need.

Tuba has regularly saved five Ethiopian Birr per week, the equivalent of 20 cents euro. While the El Niño drought has exhausted her reserves, she still makes a huge effort to continue saving – although greatly reduced.

While you cannot eat money, Tuba Alyi understands that continuing to save will help her, and her fellow group members, in the longer term –  if they can only survive the current unprecedentedly dry spell without losing all their belongings and then getting trapped in a vicious cycle of poverty. 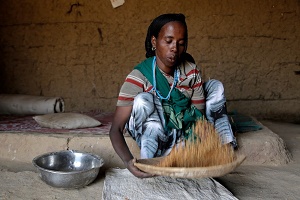 Tuba Alyi prepares food for her children with the last sorghum grains she has left. Photo: Terhas Berhe/CARE.

Tuba and her VSLA group describe how when one community member is struggling, they meet to discuss how they can help. Decisions are made consultatively. In harder times they discuss how to collectively diversify their income, for example investing in chicken rearing over crop production. Such a safety net of cooperation and solidarity helps the whole community to become more flexible and resilient in the face of seasonal shocks and dry spells.

While the impacts of El Niño in 2016 have proven to be too forceful to rely on community-based coping mechanisms alone, and international assistance is now critically needed, Tuba Alyi is developing the skills needed to master future droughts, which will undoubtedly get more severe as a result of climate change.

A strong, determined and forceful woman, Tuba is a shining example of how the VSLAs are also excellent means of increasing the ability of women in rural Ethiopia to take their lives into their own hands.