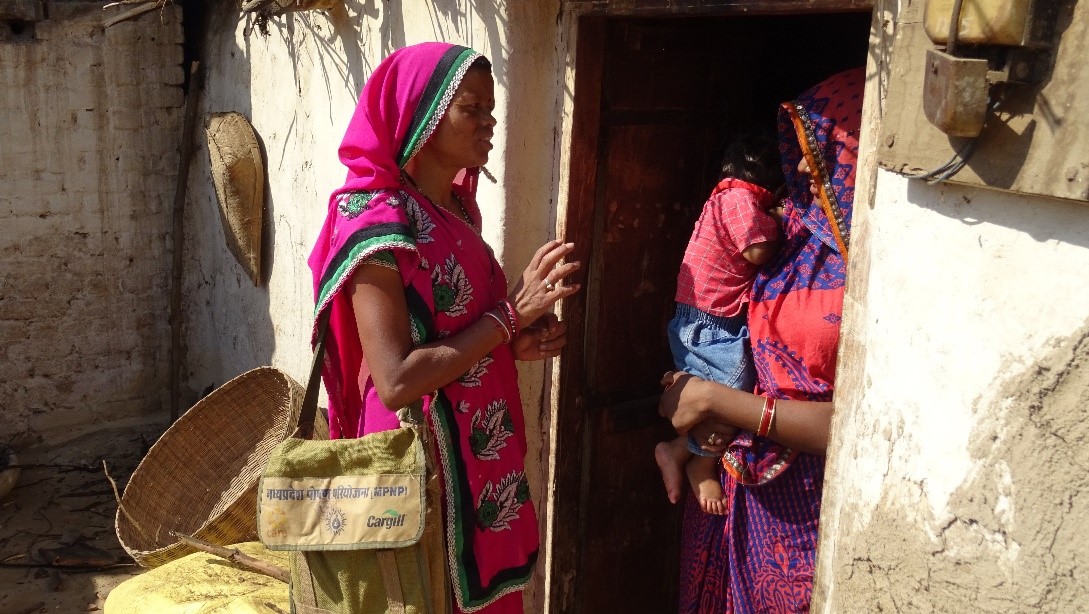 Meera, a 28-year-old woman from Gulganj Village in Madhya PradeshÔÇÖs Chhatarpur district, is a mother of three young children. Even though she couldnÔÇÖt pursue her education beyond high school, and was married off early, she never gave up on her dreams and aspirations to do something big in her life. MeeraÔÇÖs husband was a daily wage labourer, so she had to brace some financial difficulties after her marriage. To support the household, she started growing vegetables on a small piece of land, and selling them door to door to make some money.
This continued to be MeeraÔÇÖs life for several years, before her fate took a new turn and she was selected as a nutrition volunteer for CARE IndiaÔÇÖs Madhya Pradesh Nutrition Project (MPNP) team in the village.
Once Meera joined the MPNP team, she worked diligently towards identifying undernourished and malnourished children (0-5 years) from her village. She started conducting meetings and counseling sessions for mothers of malnourished children, and motivated them to send their children to Nutrition Rehabilitation Centers (NRC) for treatment.
When Meera had joined MPNP, there were nearly 70 malnourished and 27 severely malnourished children in her village. Due to her consistent efforts and counseling, today there are only 15 malnourished and 12 severely malnourished children in the village. She has, so far been instrumental in sending five severely malnourished children to NRC, and all of them are healthy now.
Meera has earned immense respect for herself, and especially the women in her village are extremely thankful to her for counseling and help.
Meera says, ÔÇ£Earlier everybody called me a Sabjiwali (vegetable seller). Today everyone fondly calls me Didi and blesses me because I helped in their childrenÔÇÖs recovery.ÔÇØ
Apart from helping others, MeeraÔÇÖs exposure and learning as an MPNP nutritional volunteer, have successfully helped her improve her own health. From the time, she used to sell vegetables door to door, her weight has increased by almost 10 kilograms now.
Meera also promoted the importance of small savings, and encouraged the women she interacted with in the village, to form self- help groups. She has now joined Madhya Pradesh GovernmentÔÇÖs ÔÇÿTejaswini ProgrammeÔÇÖ, that aims at women empowerment through self- help groups, their federation and their capacity building.
From a woman who hesitantly started her MPNP training, she now gives speeches at various platforms of the SHG Federation, to inspire and encourage women to come forward. With her confidence and aspirations only growing stronger, Meera contested the Panchayat elections in 2014. She capitalized on her popularity and support from the women, and didnÔÇÖt spend a single penny on her campaign. She still got third highest votes amongst all candidates.
Today, Meera confidently says, ÔÇ£Next time when I contest the elections, I will certainly get elected, as I am sure I will have many more supporters then.ÔÇØ