A Milestone for Wasima and Udaan Mewat 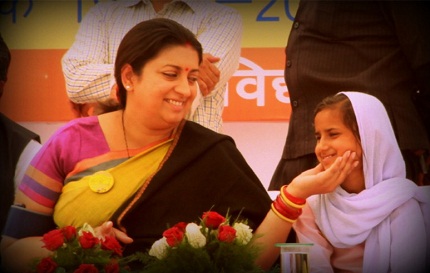 Little Wasima Khan, age 11 with bright, sparkling brown eyes is by far one of the liveliest characters I’ve ever met. Filled with boundless energy, you’ll find her dashing from one corner to another at Udaan Mewat’s campus.

Last November, Wasima, along with about a dozen other Udaan students took part in a day-long school fair where they stood at a booth to share their experiences with the Udaan program. The girls, along with their teachers and CARE India staff, eagerly awaited the arrival of Human Resource Development Minister Smt. Smriti Zubin Irani who was scheduled to attend the closing function of the Bal Swachhta Mission, a cleanliness campaign by the government aimed at schools across the country. 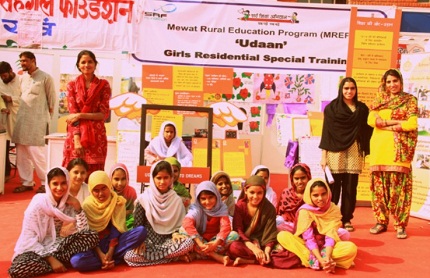 As luck would have it, the minister took great interest in Udaan students and was enthralled by Wasima who confidently spoke about the importance of girls’ education, the unique Udaan model, and her own aspirations. At the end of this conversation Wasima (with a little push from CARE staffer Seema!) mustered the courage to tell the minister that she wasn’t being allowed by the event organizers to enter the seating area meant for the audience.

The minister, impressed with her bravery and intellect, took Wasima’s hand and walked her to the stage where they sat together for the duration of the function. The cherry on the cake though was a surprise for everyone: Minister Irani, in her concluding speech, announced Wasima as the Brand Ambassador for the Bal Swachhta Mission for the state of Haryana and requested Haryana Education Minister Shri Ram Bilas Sharma to personally visit Wasima’s parents to get consent from them for her newly appointed role and ensure that she is able to continue her education.

As soon as the minister left the venue, the media thronged Wasima asking for interviews with both her and Udaan camp coordinator Poonam. Wasima’s story was covered across local and national dailies and we expect that her five minutes of fame will help fund her education and shape up her future in the way she desires.

About Join My Village:
Join My Village supports and features CARE’s work in highly impoverished communities which aims to expand access to education to include both girls and boys, and to provide training programs that improve livelihoods and enrich the broader community.