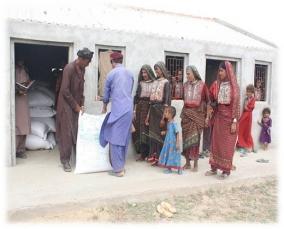 Gujarat is one of the fastest growing economic regions in the country. Yet in some regions within the state, the pace of development is slow due to geographic and weather constraints. The district of Kutch is less developed compared to other parts of the state. It is the second largest district of Gujarat and the majority of its inhabitants are predominantly residing in rural areas (67%), and among them, nearly a quarter of the population (23.3%) is estimated to be living below the poverty line. The district remains vulnerable to various natural hazards like flood, earthquakes, cyclones and drought. Low literacy levels and lack of regular employment opportunities further aggravates the situation and results in seasonal migration of poor families in pursuit of steady employment and income. 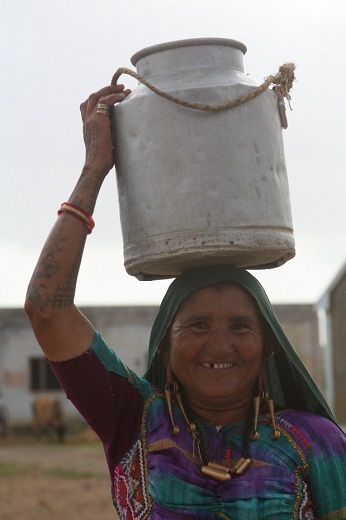 To improve the socio- economic conditions for poor families in Kutch district, CARE India, in partnership with Cargill, launched the Kutch Livelihood and Education Advancement Project (K-LEAP) in the least developed blocks of Kutch district. As a part of the livelihood promotional strategy, CARE focused on dairy activities, as majority of the households depend on dairy as their livelihood means since agriculture has become an unpredictable source of income. However, characterised by remoteness, poor marketing facilities, lack of adequate animal care support system and storage facilities, the local community is being forced to sell their produce at low price. CARE has mobilized the small dairy owners into small groups in an effort to make it an attractive supply source for leading milk collecting agencies and thus, to increase their margins of profit. The group members are trained on basic livestock management practices and better fodder management practices as the region face the challenge of water scarcity. The program also engaged with the National Dairy Development Board (NDDB) and Amul Dairy to introduce new milk collection routes and expand their services to other villages. The program sought support from the state and local veterinary departments to train volunteers on animal services and developed a trained cadre of para- veterinarians to attend emergency animal care. 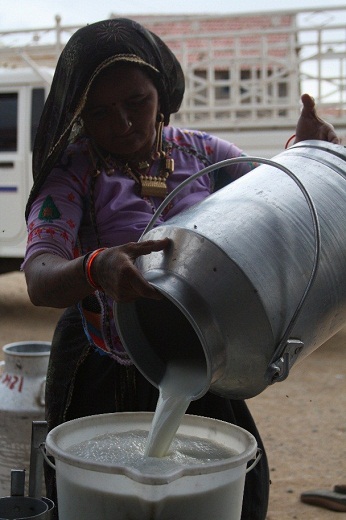 Happy with the results of collaboration, NDDB has provided fat testing machines to collection centres, increased the frequency of transportation facility to milk procurement centres and offered additional veterinary services to the livestock owners. CARE facilitated direct interactions between project participants and representatives of NDDB. Further, it was decided that the payments will be paid through bank accounts, which were opened either in the name of a woman member or through joint accounts of spouses to ensure that the income was controlled by both women and men. The project also established cattle feed sales centers to help the dairy owners to purchase feeds for their cattle at low margin price. The program has supported 3454 families to gain access to improved market and cattle feed facilities. Currently the milk producers sell one litre of milk between Rs 25 to 45 against Rs 10-15 before the project intervention period. The average milk production has also increased to 9.5 from 2-3 litres. CARE has worked closely with the community and the local/ state groups to increase the income level and foster livelihood opportunities in the area. Arun Tiwari, Project Coordinator- K LEAP project, CARE India