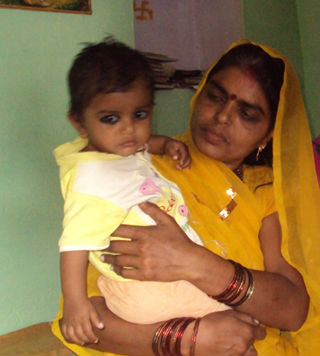 28-year-old Maya Mishra from Badamalhera Block’s Chaikuwa village in Madhya Pradesh has had a tough journey to ensure health and well-being of her children.
Maya’s husband is a farmer and the only earning hand in the family. The family’s only source of income is a piece of two-acre land.
CARE India’s staff first met Maya in December 2013 during their routine home visits in the village. At that time, Maya’s youngest son Arsh was just 22 days old and elder daughter Deepali was 1 years and 2 months old.
Maya told CARE India officials that she was breastfeeding Arsh two-three times a day and that he still fell in the yellow area in the growth chart.
They advised her to breastfeed Arsh at least 8-10 times a day, and to start eating one additional meal everyday so that her own health doesn’t deteriorate. They counselled her on the importance of a proper balanced diet for any child’s growth and development from six months to up to two years of age.
During the visit, CARE India’s officials discovered that Maya’s daughter Deepa was also extremely weak. She was severely underweight and fell under the red zone in the growth chart. Maya had fed Deepali water and cow’s milk during the first six months after birth.
After her son Arsh’s was born, Maya said that she couldn’t focus on her daughter much and stopped breastfeeding Deepali, which further deteriorated her condition. CARE India officials told Maya that feeding water during the first six months was a wrong decision, and that only breast milk should have been given to her, since it’s a holistic meal for the child.
After a month, CARE India’s staff visited Maya again and saw that Arsh had gained a kg of weight. Maya informed the officials that taking their advice, she was now regularly breastfeeding her son 8-10 times a day. She was thankful for the advice, since she could herself significantly feel the improvement in her son’s and her own health.
Still concerned about Deepali, CARE India officials then further encouraged Maya to focus on Deepali’s health too. She was advised on how to prepare and give food hygienically four to five times a day, along with counselling on why it is important to focus equally on nutritional needs for both the male and female child.
Within a month’s time, Deepali’s situation improved to the yellow area in the health chart. Maya was extremely satisfied that both her children were now healthy, more active and happier.
By July 2014, CARE India’s staff also initiated efforts to counsel Maya’s husband on how his involvement in their children’s health was his responsibility as well. They advised him to help more in household tasks including the daily care of the children.
In September, during one of the severely malnourished (SAM) meetings, CARE India’s team called upon Maya to share her experience with other participants, explaining how correct feeding practices helped in improving the overall well-being of her children.
Maya’s both children, Arsh and Deepali are now completely healthy and figure in the Green radar on the health chart. She is extremely happy that her children have completely recovered, and her husband has also become more attentive towards the family.
Maya’s story is an example of the changes possible due to correct feeding practices and has inspired many others in the community. Her journey has paved the way for significant transformation towards age-old beliefs around malnutrition in the village.