National Consulation: A study report on perception of domestic violence and the PWDV Act, 2005 in Bihar 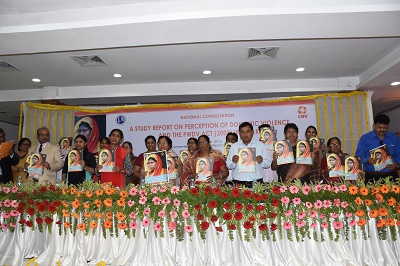 Act (PWDVA), 2005, CARE India has initiated a project “Justice to Domestic Violence Survivors” in partnership with Mahila Jagran Kendra (MJK) in two districts of Bihar- Patna and Samastipur. As a part of the initiative a study was conducted – ‘An Analysis of Perceptions of Domestic Violence and Efficacy of the Implementation of the PWDV Act (2005) in Bihar’- in 9 districts (Patna, Samastipur, Betiah, Gaya, Bhagalpur, Siwan, Munger, Araria and Supaul) of Bihar, to gain a deeper understanding of people’s perception of domestic violence against women and its impact on health, education and livelihoods of women. Through this research, we aimed at understanding the awareness of PWDV Act amongst the community and relevant stakeholders and assess the effectiveness of its implementation in the state of Bihar.

A ‘National Consultation- A Study Report on Perception of Domestic Violence and the PWDV ACT, 2005 in Bihar’, was organized in Patna on March 30, 2016, to disseminate the findings of the study, explore possibilities to collaborate and advocate together, and bring positives changes in the lives of women and girls. The report will help all key stakeholders to better understand the impact of domestic violence on women, and take focused interventions to address the issue.