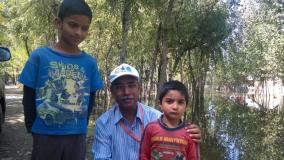 I recently travelled to Jammu and Kashmir along with my colleague Satyadarshi Patnaik, to gain a first-hand understanding of the post-flash flood situation in the affected region. Our idea was to review the interventions, which we have been carrying out, and those which we are planning to undertake in the coming days, in responding to this emergency. The Government of Jammu & Kashmir declared 14 districts as “Worse Affected” based on the initial review. Eight of these are in the Division of Kashmir, and six in the Division of Jammu. Our team, in collaboration with our local partner organizations, has positioned itself quite well and has begun to earn respect of many other stakeholders, including the SPHERE India members working there. We learned that CARE is the only NGO working on the ground in district of Rajouri, through its local partner. Our team was referred to, by other actors responding to the Emergency, on a number of occasion on various issues. We felt very proud, to see our colleagues and local partners work in such speed and pace specially knowing, it is required the most. 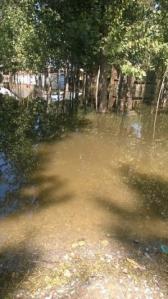 On my way to Baramulla, I noticed that while the flood water has mostly receded, a lot of stagnant water patches were observed in many locations. The water-patches may not dry up soon, unless some measures are taken, which seemed to be unlikely. Such stagnant water may pose serious public health threat. While, the high altitude of the locations we visited may not allow mosquitos to grow, and thus malaria may not become a huge issue however, pollution of water ditches, and use of such water may lead to many public health problems, like, diarrhoeal diseases and other intestinal problems or skin infections etc. 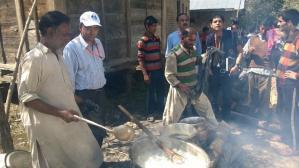 It was quite encouraging to see that communities are getting their act back together. People seemed to be restarting their lives, although at a slower pace.

I could visibly see a huge loss. Many Apple orchards, other crops were badly damaged, houses collapsed thus resulting in loss of shelter. What concerned me the most, was the harsh reality that; on one side some population was in a position to re-build their houses and cope with their losses of livelihood and crops, on the other side, some population had no capacity to do so.  Though this is a cruel fact of life but it made me think that we must not end up helping those who would otherwise be able to help themselves in some way but should come in support to recipients who would be more critical and vulnerable, given the circumstances.

What made both me and my colleague feel concerned was the extent of damages the people have suffered both in scale and nature. 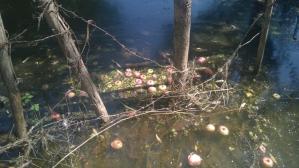 Post my visit we sat with our team and local partner managers, and had a de-briefing session with them. We realised that there was a need to revise our initial Flood response strategy, and plan further of supporting homeless families. We all agreed that there is an urgent need to reach out to people to help them deal with the challenge they are likely to face due to the upcoming winters, which may reach the peak by mid-through-end November. As we gear up to speed up our efforts, I felt pleased to see the commitment and dedication with which our team and local partners have been working in Jammu and Kashmir. I salute the valley and its inhabitants for rising up in solidarity to face this challenge and also would salute our team and partners who despite all odds are standing strong in support.