Not everything is lost: Earthquake is an opportunity to build a stronger Nepal 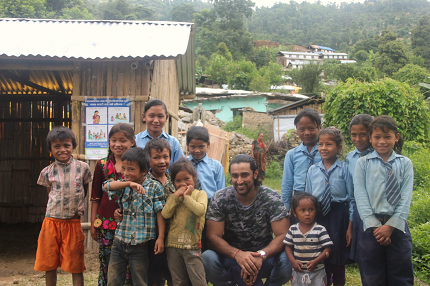 I was visiting Nepal after three years and this time it wasn’t the same. I knew life would have changed after the April 25 earthquake, however, to be physically there in the middle of the devastation – it was heartbreaking. The victory tower of Nepal – Dharhara which used to stand tall at the center of Kathmandu was missing, the ancient Hindu temples were badly damaged. I always admired the architecture of this country however, today those missing pieces of history can’t be replaced.  Most difficult was to meet friends who had lost their immediately family yet continued supporting relief work immediately after the tragedy. The support that CARE is providing to the survivors of the earthquake was in an area which is a three hour drive from Kathmandu in central region of Nepal called Sindhupalchowk, which was one of the worst hit areas.

Kunal Kapoor – the Bollywood actor, who runs a crowdfunding platform called Ketto, helped raise funds to support relief efforts for people affected by the Nepal Earthquake. Kunal had been wanting to visit the field and see CARE’s work, and we finally organised a visit with him early this week.

As Kunal and I moved towards Sindhupalchowk, each house had cracks – a reminder of the tragedy which families had gone through only a few months back. Few kilometers from Melamchi – the District Office of CARE Nepal for coordination of relief efforts, we were faced by a landslide. It had been raining continuously, and we either had to come back or find an alternative route.. Lex who is the Country Director for CARE Nepal came to our rescue. He managed to find an alternate route, negotiated with a bus driver who blocked a narrow lane going uphill, cleared the way, and guided even the locals who followed us after being stuck for hours.  We finally reached Melamchi and met the CARE Nepal staff members to understand more about the relief work in the region. With a short break at Melamchi, we were excited to hike to affected villages. The team was expecting an half an hour walk uphill. However, we soon realized that the time frame was for locals and not for visitors like us!   It was a test of endurance for people coming from Delhi and Mumbai, and it took more than an hour and a half to reach the village Duwachaur which must have been at least four kms away.

Even though people of this village lost almost everything, they were still smiling. The courage that Nepal has shown after this earthquake overwhelmed me. Talking about that fateful day and the many aftershocks, they spoke about how they have been living in fear of losing whatever is left. But there was something which kept them going, and they said that sooner or later, it would be business as usual. How can it be we wondered – they had lost their houses, families, and their agriculture land. What was there left with them? How can they continue to be so hopeful? Even Kunal could not resist complimenting them for their resilience.

In other circumstances, CARE Nepal would have moved on from the relief to the rehabilitation phase. However, with rains impacting the relief work, availability of relief material to the survivors still remained a big challenge. The immediate need was to distribute weather resistant emergency shelters  to survive the monsoons.

CARE Nepal had already reached nearly 98,000 individuals from 19,600 households with food, emergency shelter, survival kits and hygiene items, and was scaling up its response to reach an additional 1,00,000 individuals from the most vulnerable communities. They had been distributing reproductive health kits to villages, as impact on pregnant women and mothers with newborns was also a concern, as many women in the rural areas no longer have access to healthcare, because many of the health clinics were destroyed. CARE plans a long term intervention which will address issues of chronic poverty while Nepal recovers from the calamity caused by the earthquake. CARE efforts by the end of rehabilitation phase hopes to build stronger communities by addressing larger development issues.

The families were thankful to CARE for being a great support, and they were reassured that CARE will stand together with them in the times to come. The community wants CARE to help them rebuild their lives as they see CARE as their greatest support in moments when their faith is shaken.

CARE India stands as a pillar of support to CARE Nepal, and the people of this Himalayan Kingdom, to ensure that smooth logistics and sufficient resources are in place. We are committed to providing continuous support to the affected communities till life is normal, and the people and can once again pursue their dreams and aspirations.