One Team. One Heartbeat… Surajmani’s Story 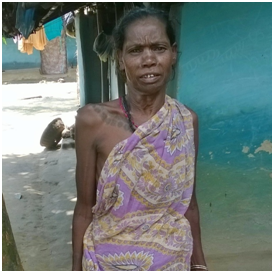 Surajmani is a 52 year old widow. She earns a living as a labour in agricultural fields. Through her income, she can meet her basic survival needs. For any other expenditure, she has to take a loan with a high interest rate. She is a poor and weak woman from the Santhali tribe of Dighalbank Block in Kishanganj District.

Surajmani has four daughters and a son. Her daughters are all married and her son works in Chennai, as a watchman. Sidham Soren, her husband, died two years ago and she now lives with her eldest daughter, Lukhi Soren, and son-in-law, Binod Soren.

She was diagnosed with Kala Azar on 20th July, 2015 in the Primary Health Centre (PHC) at Dighalbank, and was referred to the Kishanganj District Hospital for treatment using Ambisome (Ambisome is an expensive first-line drug of Kala Azar. It is only available in the government owned hospitals and can only be administered by trained doctors).

Kala Azar is a vector borne disease, prevalent in Musaharand Santhali community in the District. They have very poor standard of living and education. Most of the people of such communities work as labour, and live in hamlets near the village.

CARE India came to know about this patient and she was traced in the Santhali hamlet of Churakutti village of Dighalbank block.

Surajmani told us that she is alone and the District Hospital is very far from her residence. Therefore, she decided to get herself treated privately. We informed her that she needed Ambisome, which is only available in Government Hospitals, and no other medicine is as effective.

Lukhi, Surajmani’s daughter, was concerned about her mother and hence assured us that, after discussing the dates with her husband, they would go take Surajmani to Kishanganj District hospital.

A few days later, we went back for a follow-up visit. Surajmani then told us that the doctor had prescribed blood transfusion before administering the medicine. None of her attendants was fit to donate blood, and she was scared of the process of blood transfusion, therefore she came back.

ASHA of Churakutti village helped us persuade Surajmani for treatment and she agreed. We carried her to Dighalbank PHC, and from there she was transferred to the District Hospital in an ambulance.

The doctor who was treating her observed her for a few days and recommended blood transfusion again, in order to stabilize her haemoglobin.

We spoke to the Blood Bank in-charge at the District Hospital, to arrange free blood for Surajmani. He told us that free blood is only given to patients with Thalassemia. However, he agreed due to his relationship with us.

Even though Surajmani’s Haemoglobin count rose from 7 to 7.6 g/dL the doctor recommended another round of blood transfusion. We arranged a discussion with another doctor who was expert on the usage of Ambisome. Following the discussion with the expert, Surajmani’s doctor agreed, and she was given Ambisome the next day.

We visited her twice everyday to make her comfortable in her environment. On one of the days, we arrived to find that Surajmani had left, without any prior information, because she felt homesick.

We called Surajmani’s son-in-law, and requested him to bring her back for the final stage of her treatment. He brought her back to the hospital and the final dose Ambisome was administered to her.

As part of the follow-up routine, we visited Surajmani a few days later, and found her smiling as she came out of her house. Her condition had improved and she was in much better health.

Surajmani now helps spread awareness on Kala Azar in her community and is our brand ambassador.