27th April, 2015. Even though the option to choose what to wear has occupied a dominant place in women empowerment agenda, it is often relegated to the background when working with women in rural areas. There is an assumption that the issue is too ‘urban’ and is of less relevance for the women of rural areas. But ability to make these choices do matter to women, especially in villages of Uttar Pradesh.

I was a part of a team that visited Join My Village Project (JMV) project area in Ibrahimabad village in Barabanki district. JMVproject, currently being implemented in four districts of Uttar Pradesh, aims to bring sustainable improvement in maternal and newborn health through effective service delivery and addressing unequal power relations between men and women by integrating gender and sexuality in its interventions.

When we were informed that we will be interacting with men and boys group as part of the project’s efforts to address unequal gender relations, I was not expecting anything other than rote answers. Count me as a sceptic: I believe that patriarchal norms and unequal power relations are too deeply entrenched, and challenging them is an uphill task…once you scratch the surface, patriarchy stares at your face, but this changed…During our interaction with the men and boys, a recently married young man(Krishan) told us that his wife prefers wearing salwar- kurta and he fully supports her decision to do so. This got me interested, as here was a script that was out of the conventional narrative. 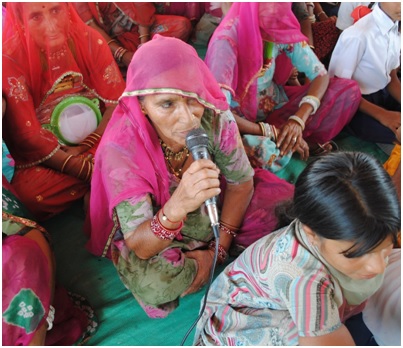 Krishan has been married recently and his wife helps the family with the household chores and farm activities. One day she confided in her husband that sari for her is not an ideal choice of garment, especially as it hinders her in carrying the household chores, and farm work. She also told him that in her mother’s house, she had rarely worn a sari and thus is not used to it. After some hesitation and internal debate, Krishan told her that if she is more comfortable in a salwar- kurta than she should wear it. However, this waseasier said than done, immediate opposition came from his parents, and then the relatives. Krishan reasoned with them and championed the cause of his wife – and found a middle way. The bride will wear salwar kurta inside the house, which over time changed to the vicinity of the house, and later to the village! Krishan, with an impish smile told us that the decision has had a larger impact, the other brides got a reason to demand similar privileges from their husbands and in- laws. There was an example in the village itself – ‘if she can, why not us, after all she is also a new ‘Bahu’(Bride). Now the village has many brides who have the choice to wear a sari or a salwar kurta, in the end, it isultimately their choice.

*Photograph is for representation purpose only.