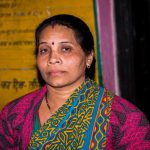 In India Patriarchal family system gives more rights and authority to the men over women in family.  Women are considered inferior and secondary to men.  This is the story of Rajni, who is differently-abled but was expected to fulfill all her duties set as per the society despite her physical challenge. Although Rajni is a BSc. Graduate but her educational achievements were not enough to give her confidence and enhance her self-esteem. She was not able to do her domestic jobs as efficiently as her able counterparts and this made her feel low about herself.

Reluctantly she joined the GAP Inc. P.A.C.E. learning group formed by CARE India. Initially, she was not interested and was a bit apprehensive of what she would gain from it. Since she was educated she grasped things better and her views and opinions were appreciated and accepted. The participatory approach prompted her to communicate in and soon she was able to improve her self-esteem and confidence. Sessions on Communication, Problem Solving and Decision making, WASH, Time Management, Positive Thinking, Stress Management, and financial management added to her personality.

While she was improving through the meetings, survey for PMAY (Pradhan Mantri Awas Yojna) scheme was being conducted in her village to identify beneficiaries. During the survey, she learned that although she was eligible, her application was rejected without any reason. With a glimmer of hope, she asked her husband to follow-up with the Sachiv (Secretary of Gram Panchayat) but he gave up the idea to inquire.

Rajni was not willing to give up easily as she believed that this was the time to speak up for her rights and if she kept quiet, she and her family would miss this opportunity. It was now or never for her. She went and inquired from the Sachiv (Secretary of Gram Panchayat) and handed him a written complaint and took a receipt on the xerox copy. She then followed up 3 times after the complaint was lodged and threatened to complain to the higher authorities if her request was not heard.

Finally one day she got a call from the higher level officer that her application has been received and soon a surveyor will visit her. Following the survey, her application was cleared, and her house was sanctioned. The construction of her house has commenced and now only the slab work is pending.

She is thankful to the initiative of Women + Water Project which enabled her to overcome the mental barriers which limited her and now believes that she is  as able as other women in the village. She now aspires to help other women in her village in filling the application for the PMAY and help them to claim their right.