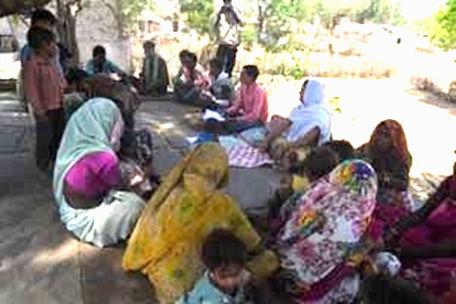 Pawai block is located almost 65 kms away from Panna district. Juhi is one of the villages in this block having a large tribal population. The total population of this village is 1260. There are two prominent castes, one is Yadavs who fall under OBC and other is tribes. The major occupation of Yadav community is agriculture and they are somewhat prosperous too.
However, the tribes own no lands and are mostly daily wage labourers, many of them collect wood from the forests and sell to markets to earn some money. When CARE MPNP project was started and this village was taken as an early intervention village, there were 13 severely malnourished children, and as expected 12 out of them were from tribal community.
Nutrition volunteer Sudha and CARE team tried hard to motivate families to send their children to NRC, but despite their efforts, only 4 children could be admitted in NRC in 18 months. The reason was the heavy workload of the mothers that prevented them to stay at NRC even if they wished to admit their children.
Almost one year back, CARE MPNP initiated Gender Transformative Change activities in this village to address the root causes behind this prevalence of malnutrition.

The target group was parents of malnourished children, pregnant and lactating mothers. With these selected couples, modular reflective meetings were conducted. The very first meeting was on workload sharing. In this meeting the couples were sensitized on the fact that the women had to do much more work than the men and because of this heavy workload they are unable to take care of themselves and their children. This leads to malnutrition among the children.  The second modular meeting was on food distribution at home and it was found that despite the heavy workload, the women didn’t get proper nutrition that affects their and children’s health adversely. These sensitization meetings helped in bringing about positive behavior changes in the community regarding workload sharing and food distribution.
During the first meeting the couples were informed about the condition of 9 severely malnourished children who couldn’t be admitted in NRC owing to heavy workload of the mothers. The men realized this fact and soon started helping women in household chores. They also realized that collection and selling of woods consumes most of the time of the women. Then they decided that now onwards the men would go to market to sell the woods instead of women. It is a common sight today that men are going to market to sell the woods which was earlier done by the women only.
These positive changes helped in reduction of drudgery of the women and succeeded in sending five children to NRC within a month and the rest four children were also admitted in NRC within 4 months. Today all of them are healthy.
The lives of the participating couples have undergone a sea change, they are now living in harmony and happiness. The couples are now motivating and counseling other couples in their community too.