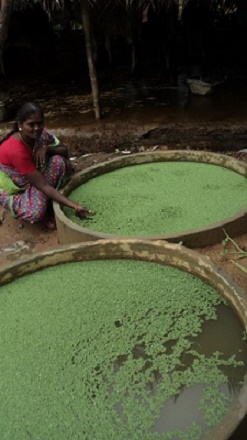 Following the success of the Dairy Value chain model in one of the villages in Srimushnam block, Tamil Nadu; the State Planning Commission (SPC) has agreed to replicate the Dairy Value Chain Project in another 20 villages in collaboration with District Veterinary Department. After careful scrutiny of the proposal by CARE India and Partner NGO –REAL, the officials from State Planning Commission (SPC) visited the project and its interventions. Impressed with the impact created by the project at the community level, the SPC sanctioned around 21 lakhs to replicate the Dairy Value Chain Project in 20 other villages in Srimushnam. The project was inaugurated with assistance for credit to 100 milch animal rearers through convergence with ADFT-Agriculture Development Finance Limited –Tamil Nadu, a subsidiary of NABARD.

This exciting journey began with a baseline study by CARE India and Partner NGO –REAL in Srimushnam that revealed that even though 85% families of the block had prior experience of rearing milch animals, only 12% actually undertook it. Milk productivity was recorded at just 4 litres/day/animal, against a potential of 7-10 litres/day/animal. The community had limited knowledge on suitable feeding and fodder practices, and relied heavily on traditional feeds since their access to fodder markets was restricted. The overall awareness about insurance related coverage on milch animals was also negligible.

Equipped with these findings, CARE India and REAL introduced the Dairy Value Chain project in the block, envisaging a paradigm shift from the conventional micro finance approach to a value chain financing approach. Strengthening livelihoods (dairy) of its members, this three-year project was first implemented in February 2012 and ended in January 2015. The project helped in substantially increasing the number of milch animals in the area and created opportunities for increased incomes

The project introduced around 2500 cross breed milch animals through tie up with NABFINS (NABARD FINANCIAL INSTITUTIONAL SERVICES) and Self Help Group Federation to the tune of 7.5 crore and increased the milk production in the operational area.

For addressing feed and fodder requirement of the newly acquired and existing milch animals, women were trained and financially to set up feed shops and fodder plots. Traditionally, animal ownership is traditionally under men in the area, who take the proceeds from sale of such assets. But this project brought about changes in this ownership pattern indirectly by insuring maximum number of milch animals.  Increasing evidences of how women were able to influence their husbands in sharing their responsibilities in rearing of animals were also reported during the project. 21 milk collection centres were established in 21 different villages throughout the project, which have been tied-up with Aavin, the milk cooperative in Tamil Nadu and Arogya and Tamil Paal, a private milk processor thus increasing the price of milk from 14 Rs to 32 Rs. Veterinary services were also ensured to cattle rearers by developing para-vets locally that shrunk the number of instances of foot and mouth disease. It was the success of this project on various qualitative and quantitative indicators, that made way for replication of this model in other villages.