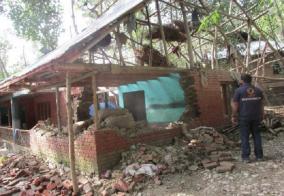 This is a tale of Sanmal Begum from Mudari Pattan village in Jammu and Kashmir. We came to this village to distribute dry ration kits. This is one of the largest villages comprising of 185 beneficiaries. Mudari Pattan has 600 inhabitants, 303 of them females. The inhabitants’ main source of livelihood is paddy cultivation. During the distribution, I noticed a pair of eyes fixed on me. A lady named Sanmal Begum was calling me to talk and share her grief. I found that the floods had ravaged her home. It used to be a four-room house but now there is nothing except piles of bricks and wood in its place. Four other houses have also been totally reduced to the ground. Sanmal Begum and her husband live with their five daughters and a son. Nargis was their only daughter who was lucky enough to get into a school. The other four sisters work for a local Pashmina Shawl vendor. Sanmal Begum’s son and husband work as agricultural labourers. Her son has 5 children of which, two are in pre-school. When flood waters hit her house, she told us with tears in her eyes, she lost a cow and two calves. After losing their ‘Jannat’ (house) they went to the government quarters for shelter. One can understand the pain of a family which had to squeeze itself in a small place after the floods hit them unexpectedly. An even bigger blow dealt by this tragedy is perhaps the complete washout of the paddy field. They are trying to get some help from the government, which is expected at any time now. 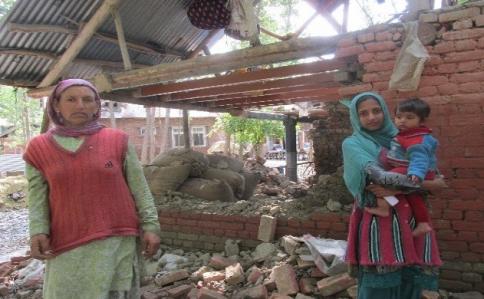 Sanmal and her family want to get out of this situation and forget this setback. They want to start a new chapter in life. It is not possible for them to simply brush this episode aside as a small loss, the memories will remain with them for quite some time. The unprecedented pain and destruction will leave an indelible image in their hearts. Most of the affected people have similar stories. The flood brought with it great devastation and uncertainty about the future. CARE’s intervention has given fresh hope and brought back the light to these people’s lives. A new chapter in the stories of the locals has been started by this support.

I struggled to give a concrete answer when the community asked me for the next phase. With a heavy heart, I told them that we are working on it, but are unable to promise anything. The community’s expectations have increased manifold. I also referred to government aid that might support them for shelter in a big way, based on what I had heard from officials and seen in newspapers. We hope that the government reaches these people with proposed 44,000 crore soon enough. One thing that I learnt from the Kashmiri community is that they stand tall against any challenges and problems. None of them were found despairing while sharing their stories. They have fought many battles, perhaps this is just another one for them. CARE has shown solidarity with the people and the beneficiaries expressed their appreciation for its work.