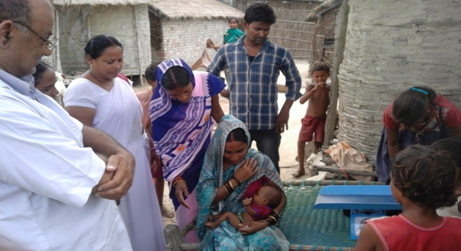 The Block Panapur lies in an area of strong Naxalite influence, and has been subjected to several attacks in the past. It is near the districts of Siwan and Gopalganj. The only medical facility in the Block is a Primary Health Centre (PHC) which runs in an APHC building and lacks basic infrastructural facilities. There is only one ambulance at the PHC. In line with the number of patients that arrive at the centre, the transportation facility is highly inadequate.

Reena Devi is a resident of this area, and she gave birth to a premature baby girl. The baby was born two weeks prior, and was hence severely underweight. She weighed only 1500 grams. After the birth of the child, all the details pertaining to her were documented using an Open Data Kit (ODK). This is an Android based mobile application used by CARE India,and it uploads all the information on to a common server which is used by health activists and Anganwadi workers. These workers then make regular visits that are aimed at ensuring that weak newborns, like Reena Devi’s baby,are looked after well.

After the birth of her daughter, Reena at home was visited by the health workers, who even brought an ambulance along, in case the mother and child needed medical assistance. They found that the baby was unable to breastfeed upon returning home. Reena’s mother-in-law suggested that the baby should be given cow’s milk. However, the health workers rightly intervened and the baby was not given anything but her mother’s milk.

On a subsequent visit, the baby was found to be inactive as the mother had not been feeding her.A medical officer was contacted, and post her baby’s examination, Reena was advised that her baby needed to be kept warm at all times, especially because her skin had not developed enough to protect her.

These social health activists are trained by CARE India in order to ensure that weaker babies are given proper care at home; this is referred to as Home Based New Born Care or HBNC. This baby girl was visited around 10-12 times in a span of 28 days so as to make sure that she survived this neonatal period. She gradually started to gain weight and her growth was monitored for about three months. By the end of this period she weighed about 4000 grams and is healthy today. The family refers to her survival as a miracle.

Babies born with low birth weights have a high chance of not surviving the 28 day neonatal period. They succumb to problems like hypoglycemia, sepsis, prematurity, respiratory distress etc. Children that are born in the moderate or late period of gestation can be safely managed at home provided special care and support is given to them. However, babies born before 32 weeks of gestation and weighing less than 1500 grams, are less likely to survive, and die as a result if lack of coordination between suckling, swallowing and breathing.

In Bihar, Home Based Newborn Care is critical because of the lack of proper specialized facilities to take care of babies that are born comparatively weak. These babies require advanced life support services so as to maintain body temperature and to ensure that they are fed safely and adequately. About 90 % of such babies can be saved by taking simple precautionary measures at the community level.

Reena Devi’s story is just one of many. CARE India’s team that works in these districts has been able to save many lives through their active tracking strategy. This initiative was called ‘Mission Talaash’.

CARE has scaled its efforts and the initiative now includes 38 districts of Bihar. This innovative strategy has helped avert a number of deaths especially among neonatal girls. Use of technologies like the Open data Kit (ODK), resulted in making frontline workers more accountable for regular and follow up visits made to people’s homes. Since the initiative was launched, CARE has managed to track more than 900 babies that only had a fifty per cent chance of survival, and saved more than 800 lives.

CARE India is supporting Government of Bihar to achieve health, nutrition, family planning goals through the formation of BiharTSU, since January 2014. CARE India has created a team of highly qualified professionals with extensive experience in implementing innovative family planning, maternal, child and neo-natal health programs to deliver the projected outcomes within the stipulated time.