A small step and a giant leap 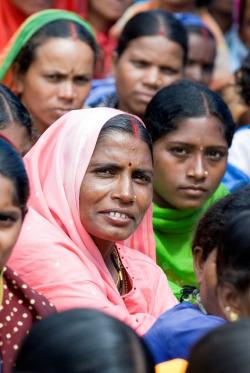 In a land where patriarchy thrives, in a country where women are mostly subjugated, in a society where gender roles are not only defined at a very early age but also any deviation is severely punished, in a family where men are not supposed to feel any empathy towards women, I saw a different side, another face of India today.

I was given an opportunity to see CARE’s work in Barabanki, Uttar Pradesh, where it is involved in the ‘Join My Village’ project. I was really excited to see the ground realities of this project.

In Barabanki, I met two collectives, one comprising men and the other women. I learnt that most meeting of these groups take place separately. At times, joint sessions are also held where men and women are sensitized about gender through different activities like cleaning a plastic infant or other types of gender training.

While interacting with the women’s group, I was happy to see the level of understanding that they have about a number of issues including, though not limited to, maternal and child health. It heartens me to know that this has been made possible, thanks to the dedicated team of CARE working in that area. The open discussion that took place where all the women talked freely left me with a feeling of ease and pride, that in spite of all the challenges faced by the women in such a patriarchal society they have found so much confidence within themselves. Many of the women shared that their husbands are supportive of them and put in an extra effort to take care of them, by helping with the baby and sometimes, even cooking.

Though the women in the group had said that the men were supportive, I was impressed to meet the men’s group, which had been organized by CARE and see the positive attitude of these men towards women. As they started opening up to me and we started an animated conversation, I realized that these men are so aware of the different experiences and problems faced by women, both physical and mental. They were even aware about the challenges faced by women during their pregnancy and after birth. I learnt how this awareness has changed their perspectives on so many issues and thanks to this awareness, their behaviors and attitudes towards women have taken a dramatic turn. Truly a delightful experience!

Now, when I think of my field visit experience, I am filled with a sense of hope. Yes, things have not and cannot change overnight, but there is hope that eventually our country would transcend and become a society where equality is the norm. I believe increasingly that women will have an equal voice in this society and will have full rights over their bodies and women empowerment would not be just a utopian concept.