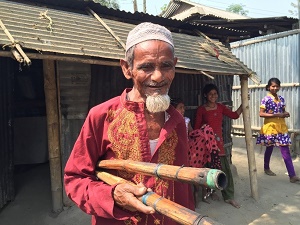 Like most of us, I have fond childhood memories of snake charmers with snakes dancing to the hypnotic sway of the flutes and nats/ madaris with monkeys dressed as colorful human characters jumping to the beats of the damru, every once in a while stopping by our house and entertaining everyone with their performances. At the end of the performance they would collect money.  Back then I could not imagine that this nomadic community of entertainers could find itself struggling to survive, as it does today. A ban on their ancestral profession in 2004 came as a crushing blow to the members of this community, most of whom had no other skills besides training snakes and monkeys for street performances.

Chacher Miyan lost his father when he was two months old. He grew up learning the art of training monkeys to perform and entertain people. This had been his livelihood for years, before the Wildlife Protection Act was imposed leading to a ban on his profession. With no other source of livelihood, his entire family was soon reduced to begging on the streets for survival.

In March 2016, I got a chance to visit Barman Pada village, Ramsai Aanchal in Jalpaigudi, West Bengal for a vulnerability and capacity assessment exercise. This village is inhabited by Baazigars (Sapera/ snake-charmers community). It was extremely painful to see the miserable condition of this nomadic community, struggling to cope with the loss of their livelihood by selling their assets and migrating to cities to seek employment as daily labour. Many have taken to begging as a last resort. Whatever modest assets they had built, the land and cattle that they had owned over years of practicing their profession, are being sold one by one for the need of survival.

60 year old Sinduribala Gwala (in red Saari in the picture), takes care of her grand daughter Jorup Bibi. Her daughter died due to illness and her son in law lives in Siliguri to earn his living, leaving one and a half year old Jorup with her grand mother. She comes from a family of snake charmers. Long ago, when she was young she used to contribute to the income of her family by selling bangles door to door. The bangles were bought on wholesale and sold on a retail price with a small margin. After the ban on the snake-charmers’ profession the family started selling their assets and using up their modest savings to survive. Sinduribala’s husband passed away 6 years ago. Her elder sons are also away in town in search of a livelihood. Having taken the responsibility to care for her grand-daughter she desperately needs money to survive. She can be seen begging for money and food in the areas near her village. She lives with a hope that someday, someone will come to assist their community with livelihoods and a life of dignity, and things will get better.

Mr. Subal Bazigar heads the Sapera committee. He shared that despite several applications to various government offices to help them with alternate skill building, they have not received any response. Their community has not even been issued the OBC (Other Backward Class) certificate while they are a registered backward class. Limited literacy and a lack of awareness of their rights and entitlements are some of the reasons for their plight. It was also observed that some of the families are certified BPL (below poverty line) while others were APL. This, however, seems to be based largely upon connections to political parties.

Mrs. Mojina Bazigar shared that their life has become a nightmare since the ban on their profession was enforced. There is no one to support them. More than half the population has migrated from the village. Limited toilet facilities in the village (a few common toilets for 7-8 houses to meet sanitation needs) and poor hygiene are major concerns for women. It is interesting to note here that during the prioritization exercise, while most of the men prioritized livelihoods and employment, most of the women voted for the need for toilets.

The situation calls for action by the Government and civil society organizations to help these Bazigars recover from the shock, build their capacity and provide options and support for alternative livelihoods.