A story of resilience and transformation

The women of Ashapur village tell how they have been able to bounce back after floods affected their lives. The P.A.C.E. training gave them knowledge on water-borne diseases in the wake of floods, and, as a result, they were able to take preventive measures.

In Khandwa’s village of Ashapur, the women who underwent the P.A.C.E. training showed their remarkable ability to bounce back after facing adversity. The village was inundated with water in July, when the river Narmada flowed over its embankment. Village houses flooded and mud houses were washed away. The people are very poor, and they had to depend on the help of others to survive the flood. Families most affected by the floods happened to be Dalits.
Rama, who underwent the P.A.C.E. training as part of the Women + Water Alliance says, “My house was broken. It drifted away with the waters of the river. The other women helped me and my family after the floods. I was provided with food and clothes. I was provided with a temporary roof,” Rama adds.
Her husband is a cobbler in the village. The small shop he had was also washed away by the flood waters – making their situation even more dire. 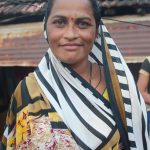 Rama says, “Everyone’s home was flooded and filthy. Women got their families together to clean up the houses. The filth was buried. This was our own initiative. This was also because of the P.A.C.E. training. The trainer had taught us about cleanliness as part of the WASH lessons.”
“We were told that the wet waste is a source of infections and mosquitoes. We bore that in mind when we were faced by the situation and decided to do something about it,” she says.
A P.A.C.E. training the women attended provided knowledge on water-borne diseases in the wake of floods, and, as a result, they were able to take preventive measures. The women got chlorine tablets from the anganwadi (the child care centre in the village) to help clean the water.
Not that there were no infections. “Children had loose motions, but we knew how to handle the situation,” says Reena. “We knew that rehydrating the body with clean water was very important, thanks to our training.”
The women, all of them Dalits, also said that the attitude of the women from other communities in the P.A.C.E. training group had changed vastly. “We were discriminated against earlier and faced untouchability,” says Jevanti, who also lost her home. “But in the training group, the attitude of the women from the higher castes has changed. Earlier, they kept to themselves. This time, they came to enquire about our well-being after the floods.”
The women spoke of how the P.A.C.E. training helped them help one another and bounce back to life, even before the walls of their homes have dried.
“The P.A.C.E. training has helped us appreciate that life is full of challenges,” Rama says. “We are aware that we cannot avoid a flood, but we have learned that we can be prepared and work together,” she says.