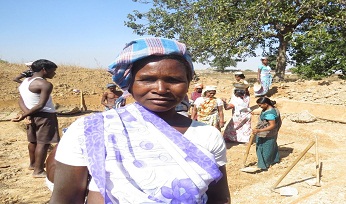 An Adivasi woman and a resident of Kharapara a small hamlet of Jamjunwani village of Pathalgaon block in Jashpur district of Chhattisgarh, Kalpana lives with her husband and three children. She has never attended school and couldn’t even remember when she got married.  She along with her husband owns three acres of land and they cultivate paddy to feed the family. However, the produce from their farmland is insufficient to meet their food requirement, and they have to depend on daily wage employment to meet the needs of the family.

Kalpana works as daily wage labor during non-farming season and carries out all kinds of manual labor, such as; working in farms, building roads, or working on construction sites etc., to support her family. However, for all her efforts she could barely meet the requirement of her family. Further extreme and unpredictable weather pattern also causes anxiety and uncertainty for agriculture.

CARE India intervened in her village through “Where the Rain Falls” a project which aims at strengthening resilience of small farmers against the risk of climate changes. CARE India formed a Self Help Groups (SHGs) in her village and she was assisted to become a member of the SHG called Tara.  She and her husband were trained on resilient agriculture practices which minimizes the usage of water, pesticides and chemical spray, besides lowering fertilizers applications and increasing usage of bio-fertilizers to increase productivity. Further, she underwent trainings to familiarize herself on modern cropping and horticulture methods for achieving regular income from field.

CARE India also advised the community on various forms of soil and water conservation practices, besides reviving water bodies in villages. One such model of rain water harvest structure at farms is popularly known as 5% model (5% of farm field is converted into water storage structure), which will help farmers to increase cropping months as well as double cropping seasons based on higher depth of the 5% model pit besides helping them to grow vegetables as water will be made available for non-moon cropping season. In addition, the farmers can grow azolla (a good nutrient for the cattle) and also raise fishes.

Kalpana was identified as the demonstrator for 5% model in her village through SHG. The SHG members are trained not only on how to build structure with 5% model but also on how to use the pond for several other purpose like, bund plantation, vegetable cultivation and relay and inter cropping methods apart from cultivating additional crop.

Kalpana is now confident of growing more than one crop in a year, and she hopes that the increased income from her field will ensure three meals a day to her family besides investing additional income on setting up a poultry to diversify her income source.

Where the Rain Falls project is working for over three thousand vulnerable women, who are otherwise ill equipped to mitigate and manage climate change induced risks, in the areas hardest hit due to climate change and helping these women protect their lives and livelihoods.