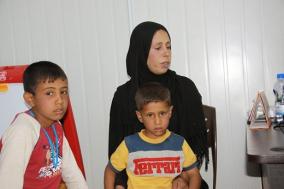 When I see Nada for the first time, she is sitting in front of me during one of CARE’s information sessions in the refugee camp Azraq in the north of Jordan. She sits up straight, her eyes directed to the front, soaking up every word my colleague Yousef says. He explains what assistance she can receive where and from whom, where she can get support for babies, how the water and medical supply works and whom she can contact if she needs further assistance. Nothing distracts Nada while Yousef and colleagues from other organisations are introducing themselves and explaining how the camp works. Not her children who are playing with an old tennis ball. Not the heat in the tent. Not even those scrambling to find a seat in the rows because they arrived late.

Once the session is over Nada heads Yousef off. “Thank you. This was really helpful, but I have one more question. Where do I find work in the camp?” Yousef refers Nada to Mohamed, a colleague. As a so called “Case Manager” he supports refugees with all kinds of questions, refers them to other organisations and manages the system of volunteers in the camp. Syrian refugees are not allowed to work legally in Jordan, but they can volunteer for organisations such as CARE for a couple of weeks. They receive a small allowance.

“I do not need a lot of money. In Azraq I have everything I need to survive. But my children need a second set of clothes. At the moment they have to stay naked in the tent while the laundry is drying outside,” Nada explains. Mohamed registers her and asks her about her qualifications and wishes. “It is not just about the money. I want to do something useful; I want to support my fellow Syrians.” Also, it is important for her that she does not have to stay too far away from her little white house. She does not want to be too far away from her four children who are between four and ten years old. Mohamed explains to her that her children under five years old can join CARE’s playing group. Her older children can go to pre-school. In September the regular school will start in the camp.

Nada tells me that she came to Azraq yesterday. She is from Daraa. It took her a week to reach the Jordanian border. She had to pay to the smuggler 4000 Syrian Lira – approximately 20 Euro – so she and her children could reach safety. “I gave all my remaining money to the man and sold my wedding ring. I have been through three years of war; I could not wait any longer.”

Three years – that is so easy to say. When I speak to refugees in Jordan, Lebanon or Egypt, I get only a sense of an idea of what people have had to go through in these past three years. Nada’s eyes fill with tears while she speaks. A haze of vulnerability seems to enwrap her. Nada is a beautiful woman; she has a straight, proud way of walking and speaking. It is her eyes which reveal her sorrow.

For the past ten years Nada worked as a farmer. Her husband was very sick and he could not work. She built up a little house for her and her family. She led a simple, but happy life – until the war started. Now constituting her every day, the suffering slowly crept into her life. First, two of her cousins were killed, then her brother. She still wanted to stay and did not want to give up her house until the morning it was hit by a bomb while Nada was milking the cow with her children. “You could not even see that there had once been a house,” Nada says. I ask her where husband is now. She becomes very quiet. The memories, her pain, petrify the face of the 28 year old. In a low voice she says: “Not only was my husband in the house when the bomb hit, but also my six year old baby… I miss them so much that I sometimes cannot breathe. I feel as if I am suffocating.”

Nada says that she feels safe in Azraq. She says that she slept through the night for the first time in three years. Her children still cry when they hear an airplane, but now she can simply close the door of her little refugee house and does not have to worry. “Right now, my only wish is to be able to volunteer in the camp, make use of my time, and do something. I want my children to feel a sense of normalcy, to calm down, to go to school and to kindergarten.” Refugees in Jordan’s and Lebanon’s cities in refugee camps like Azraq need time; they need our assistance so their hearts can become healthy again. They need time so their wounds can heal and so that the past three years of their lives will not determine the many more years which are hopefully still ahead of them.