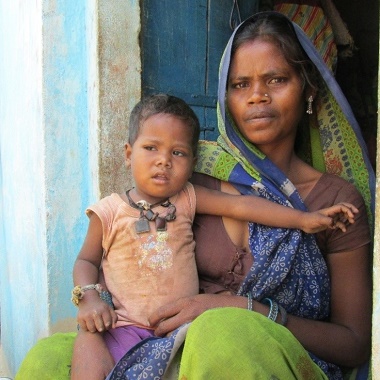 Deva and her daughter Gayatri

Mother of a two-year-old Gayatri, Deva, was deeply upset and often felt helpless when she saw that her daughter couldn’t run and play like other children of her age. Deva did not know what was wrong with her daughter and had no idea how to help her. Her worst fear came true when Poonam, a frontline worker from CARE India’s Madhya Pradesh Nutrition Project (MPNP) met her. Poonam counselled Deva about the condition of her daughter, who was severely underweight in comparison to other children of her age, and referred her to take Gayatri to the nearby Nutrition Rehabilitation Centre (NRC).

Deva and her family are a part of the tribal community of Kundar village in Tikamgarh district, Madhya Pradesh. Kundar Village is known for its historical past and attracts tourists from all over the country. Yet the ground reality is disturbing especially in tribal dominated pockets of the village. Tribals still remain a very poor community, hardly having enough to make both ends meet. Deva’s family had also been facing tough times. Deva lives with her three children and ageing mother in law. Her husband Nandu is a daily wage laborer and often ventures out of the village for work.

Even after Poonam’s persistence, Deva was reluctant to leave home and take Gayatri to the nearby NRC, since there was no one at home to look after her mother in law and elder son.

Soon, Gayatri’s condition deteriorated to a state where her survival became difficult. Poonam acted fast and brought this problem to the attention of CARE’s MPNP team. The team immediately visited the village to meet Deva and her family. They counseled Deva and her husband repeatedly. The team even motivated one of the neighbors to take care of the family during Deva and her daughter’s stay at NRC.

All the effort by the MPNP team bore fruits when Deva and her family finally agreed to take Gayatri to NRC. Deva stayed at the NRC with Gayatri for the mandatory 14 days’ period. Proper treatment at NRC helped in improving Gayatri’s condition. Post the mandatory stay, they left NRC with Gayatri in distinctly better health condition. However, she still required regular follow-ups for further improvement. Poonam, helped the family with regular follow-ups and aided Gayatri’s recovery.

Gayatri is now an active child who is able to run around and play happily with other children. Deva and her family are thankful towards the MPNP team, for its effort in saving Gayatri’s life. Deva said, “CARE has given a new life to my child. I had lost all hopes of her survival, but due to the consistent efforts of the CARE’s MPNP team my child is healthy again.” 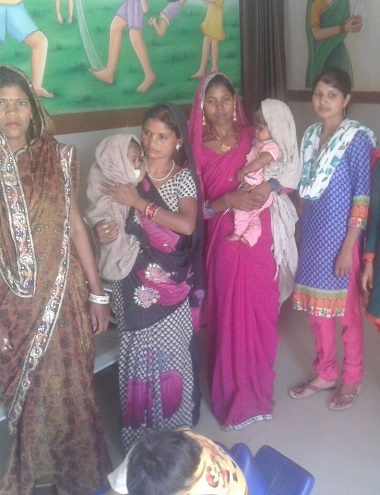