To the girls of the world: Don’t wait for a war to discover your strength 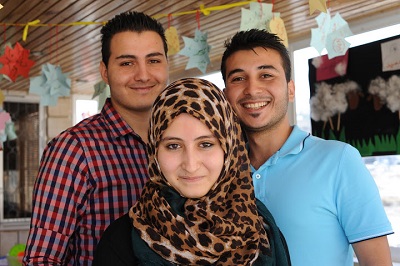 Even before the war, life wasn’t easy for girls in Syria – but we felt safe, we felt protected. Parents chose girls’ schools near the home. My school was only a ten minute walk. It was normal for me to go alone.Here, in Jordan, many Syrians cannot go to school. Some families do not want their daughters walking long distances in a foreign place, but for others, like me, it’s too expensive.I had very good marks at school, but we do not have money for books or uniforms. We must use it for rent, electricity, food.

My future has changed because I can no longer go to school. I received scholarships the last two years in Jordan, but not this year. My father has visited every charity asking for scholarships. He tries so hard to help me. I remind myself of girls in Syria who have been without education for four years.  My situation is not so bad.  Some girls enter into early marriages because the situation is so difficult.

I want to marry one day, but not now.  My education is more important to me. I have found a lot of support from my father and brothers. Leith was four years older than me, but he always asked my opinion.  He was killed during a bombing raid, he was only 17.  Another brother, Anis, was shot by soldiers. They both wanted to see me succeed. They encouraged me to study and eventually – I hope – become a pharmacist.  They were not just my brothers, they were my friends.

In a few years, I hope to be back in Syria, in Damascus, where I'll study pharmacy.  I want to open a pharmacy in every city across Syria. But I also want to write. I hope to share the story of Syria, before, during, and after this war.  I want to write about the social situation of the people, of families.  I want to do this for two reasons: to show the world what happened in Syria, and for the children, to show them we can have a new future.

My message to encourage girls around the world:  We must see the other situations of girls and learn from those situations. Life must be about more than shopping and makeup, texting with your friends or playing on Facebook.  We need to think about the future, understanding that life is not always perfect, or safe, but we must be thoughtful, offer support, and realize that we can be strong when we face our problems together, in war, in society, wherever.

To the leaders of this world:  Do not keep silent about the situation in Syria. You must speak about this war – not play politics with it, but end it.  We are crying every day, mothers and children. It's wrong and we must stop it.  Children are growing up too fast. There are nine year olds with the experience of someone in their twenties.  Really, the war must end. You can stop the guns, stop the bombs, stop the blood. You can stop this, please.

Raneem Alhomsi is a 16-year old participant in a CARE International program in Jordan that brings together Syrian and Jordanian youth to share experiences, build communication skills, and encourage stronger social cohesion between communities.