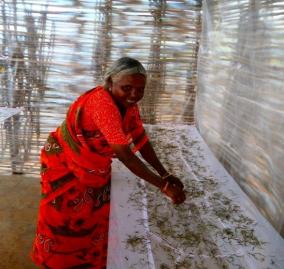 Recently many of us witnessed the vociferous fights against illegal mining, by tribal women across the country, in an effort to protect their rights from being usurped by undesirable commercial activities, and also, to preserve the natural ecosystem.

On my part, I have always been amazed by the tribal world, which is resplendent with traditional wisdom and indigenous practices. So, when CARE India initiated a project to engage Tribals in tea cultivation, I was extremely excited. Tribals have historically been gatherers of forest produces, and so to help them start cultivation of farm based crops was a huge task. The focus was on tea farming, as in the higher elevations of Nilgris, tea cultivation is one of the more reasonable options. However, in the scenario wherein tea is generally considered to be the domain of big planters or corporate estates, tea cultivation by Tribals in small patches or fragmented holdings is a major problem. Also, lack of exposure and awareness about modern practices aggravates this problem.

Keeping this in mind, CARE India emphasized on improving farming practices and helping conserve soil, moisture and water among the small Tribal tea farmers in the Nilgiris. The initial steps comprised of organizing the small tribal farmers, and focusing upon productivity enhancement and income diversification opportunities for them. The project also stressed on enabling tribal farmers grow cattle and raise vegetables in their backyard, in order to supplement their nutrition. This project also centered upon climate change adaptation initiative for the small tribal households. In the process, while working with the farmers here, I have learnt that tribal farmers are receptive to new ideas, and adaptive to improved cultural practices.
What was even more heartening to see was the active participation of women, as they emerged as guardians of food security through innovative tea leaf plucking practices. This has resulted in incremental income, which is being used to support food security.

It has been three years from our initial engagement, and I am pleased to see small tribal farms, which have diversified and are able to, thus, address food security requirements adequately. Not only has there been an increase in productivity, but I am pleased to note the resilience, which the tribal tea farmers have shown. In the back drop of commercial exploitation and depletion of natural resources, the tribal farmers are able to stand confident and tall, and act as knowledge banks with the potential to influence best practices in the hill based agrarian ecosystem.